Memorial Candle Tribute From
Hall's of Waldoboro
"We are honored to provide this Book of Memories to the family."
View full message >>>
In Memory of
Andrew W.
Williamson III
1933 - 2018
Menu
Send Flowers 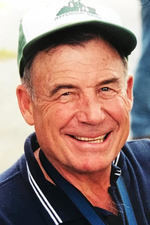 Andy spent many years as a child in Jefferson and graduated from Lincoln Academy and Bowdoin College. After graduating from college, he married his high school sweetheart, Louise Watson. He went on to earn a master's degree from Harvard University, followed by 2 years of service as an intelligence officer in the U.S. Army. After the Army, he and Louise returned to settle in Jefferson where they raised 5 children. He joined the staff of Lincoln Academy as a mathematics teacher, and as the track coach, Andy led the Eagles to the 1959 State Championship and 10 straight Knox-Lincoln County Championships from 1961 to 1970.

Andy and his family spent the 1970-71 school year traveling across the U.S. as part of a Ford Foundation Leadership Development Fellowship. In 1972 he joined the mathematics department at Mid Pacific Institute in Honolulu. He returned to Lincoln Academy in 1976 as the head of the math department, spending the next decade there. During those years, Andy coached the Lincoln Academy Math team, leading them to a Maine State Championship in 1982. In 1986 he became a teacher and chairman of the math department at the Chadwick School in Palos Verdes, California. Andy earned national and statewide recognition for his commitment to his students, including a Presidential Award for Excellence in Mathematics and Science Teaching in 1984 and the Bowdoin College Distinguished Educator Award in 2005, as well as being inducted to the Midcoast Maine Sports Hall of Fame in 2012.

Upon retirement Louise and Andy became American Baptist missionaries in South Africa. For the last two decades, Louise and Andy have spent summers in Jefferson and winters in Tucson, Arizona, volunteering on both sides of the country and in between. They have built houses for Habitat for Humanity in Maine, Texas, Arizona and South Africa, were docents for the Breakwater Lighthouse in Rockland, volunteered for the America’s Cup Yacht Racing in Portland, Maine, and New Zealand, and have helped with farm activities for County Fair Farm in Jefferson.

Visiting hours will be held on Friday, April 6, 2018 from 5-7 p.m. at Hall Funeral Home, 949 Main Street, in Waldoboro. A memorial service will be held on Saturday, April 7, 2018 at the First Baptist Church of Jefferson at 2:00 p.m., Pastor Kevin Banfield officiating.

In lieu of flowers, donations in Andy’s name may be made to the First Baptist Church of Jefferson, 24 Waldoboro Road, P. O. Box 921, Jefferson, Maine 04348.

Arrangements are with Hall’s of Waldoboro. To extend online condolences please visit http://www.hallfuneralhomes.com.