To share your memory on the wall of Suzanne Reed, sign in using one of the following options:

Provide comfort for the family of Suzanne Reed with a meaningful gesture of sympathy.

In June 1969, she married Gregory Pendleton, of Newcastle. They had a daughter, Cristal, and later divorced. In May 1983, she married Robert Reed of Wiscasset. They had a son, Matthew, and later divorced. She moved back to Waldoboro ten years ago where she resided until her death. Her favorite thing to do was spend time with her family and especially her grandchildren.

Friends are welcome to join the family for an informal gathering from 4 to 6 p.m. with a time of sharing at 5 p.m. on March 8th at the Hall Funeral Home, 949 Main Street, Waldoboro. Burial will be in the German Protestant Cemetery in Waldoboro in the spring.

In lieu of flowers, contributions in Suzanne’s memory may be made to Midcoast Humane, Edgecomb Campus, 27 Atlantic Hwy., Edgecomb,ME 04556.

Arrangements are entrusted to Hall’s of Waldoboro, 949 Main Street, Waldoboro. Condolences may be shared at www.hallfuneralhomes.com.
Read Less

We encourage you to share your most beloved memories of Suzanne here, so that the family and other loved ones can always see it. You can upload cherished photographs, or share your favorite stories, and can even comment on those shared by others.

Posted Feb 13, 2020 at 09:16am
On the first anniversary of Suzanne's passing, we want you to know that you are in our thoughts and prayers. We hope that the memories of the past give you encouragement for the future as you walk each day with your loved one in your heart. It is our privilege and honor to serve your family.

Posted Feb 25, 2019 at 03:28pm
While there are no words or actions that will take away your pain, we hope you are surrounded by much love and support at this difficult time. May the light from God's Word be a guide and comfort through the darkness of your loss (2 Corinthians 1:3,4).
Comment Share
Share via: 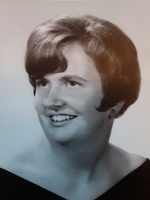