To share your memory on the wall of Beniah"Ben" Harding, sign in using one of the following options:

Provide comfort for the family of Beniah"Ben" Harding with a meaningful gesture of sympathy.

After the death of his mother when he was 5 years old, he went to live with his grandparents Beniah F. and Inez M Harding in Holliston, MA. where he attended public schools. Ben was his High School’s class president for two years before going to Colby College graduating with the class of 1942. While there he married Ida May Hart of Milbridge, ME in 1939.

After college Ben worked for a short time at the Bath, ME YMCA. Ben then received a call from Washington, D.C. indicating that he had employment at the War Department. Ben was one of the first to work in the new Pentagon. While he worked, Ida May found residence in Alexandria, VA. They enjoyed Alexandria, and Ben liked his work in Ordnance procurement. His work was interrupted when Ben received word that he would soon be drafted. Not wanting any part of Army life, he applied for and received a Navy commission . Ben served from September 1943 to January 1946.

After indoctrination in Florida and Virginia, he was assigned to the US Navy Guard, which an officer and a number of sailors were placed aboard merchant ships with the sole purpose of protecting the ship, men and cargo against enemy planes, submarines and ships. Ben’s first assignment was on the Thomas B. Robertson and participated in the invasion of Normandy at Utah Beach on D+1. The second ship he served on was the S.S. Glenn Curtis that took him from Virginia to Saipan and Tinian.

After leaving the service he, Ida May and Conrad came to Thomaston where Ben worked for Dragon Cement Company for 33+ years. Since coming to Thomaston in the Fall of 1948 Ben had been involved in many civic activities including 21 years on the Thomaston School Board, A member of the American Legion and the Veterans of Foreign Wars. Ben had been a member of the Thomaston Federated Church since the 1950’s and its historian for a number of years. Ben also had served as a Director of the Maine Good Roads Association , a member of the Thomaston Fourth of July Committee and parade marshall with his wife in 1987 and again in 2012. From 1985-1988 he was the local representative to the Maine State Legislative Committee. He was also a member of the former Maine Mid- Coast Route 1 Association and with his wife produced the first booklet outlining the benefits of the Mid- Coast. Gov. Longley appointed Ben to serve for two years on the Maine Public Labor Relations Board of Appeals. Ben spent 10 years as Chairman of the Thomaston Senior Citizens Committee that met monthly at the Thomaston Federated Church. He was also a member and past president of the Rockland Rotary Club . and also a member of the 40&8, Voiture 427.

Along with his wife, Betty Shesler and Isabell Wigglesworth The Friends of Montpelier was formed to restore the Knox Mansion on High Street. Ben initiated activities for the issuance of a postage stamp in honor of General Henry Knox, which had its first day on July 25, 1985. Ben was also instrumental in revitalizing the Thomaston Academy Building that now houses the Thomaston Public Library and other activities. One of Ben’s fondest honors was the presentation this year of a “Quilt of Valor” presented to him in cooperation with the Thomaston Historical Society which he proudly displayed in his room at the Knox Center.
Ben was predeceased by his parents, his beautiful wife in 2005, his son Conrad in 2009, and his beloved and faithful dog Rex, a Golden Setter in the summer of 1944. He is survived by a cousin Jean C. McRae of MA, along with close family friends Ron and Irene Hawes and their family of Union, ME.

A graveside service for Ben with Military Honors will be held on May 22, 2019 at 10:00 a.m. at the Village Cemetery, Erin Street, Thomaston, followed by a Memorial service at 11:00 A.M. at the Federated Church, 8 Hyler Street, Thomaston, Maine . Rev. Anne Roundy and Rev. Dr. Susan Stonestreet will officiate. Hall’s of Thomaston has care of the arrangements. To extend online condolences visit www.hallfuneral homes.com.
Read Less

We encourage you to share your most beloved memories of Beniah"Ben" here, so that the family and other loved ones can always see it. You can upload cherished photographs, or share your favorite stories, and can even comment on those shared by others. 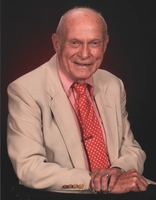