To share your memory on the wall of Russell Creamer, sign in using one of the following options:

Provide comfort for the family of Russell Creamer with a meaningful gesture of sympathy.

In November 1949, he married Edna Boynton, having met her at a dance in Round Pond. Russ was a wonderful dancer and he and Edna rarely missed a dance at Lakehurst.

Russ worked at the Waldoboro Garage before beginning his career at the Bath Iron Works, which was interrupted when he entered the Navy in 1951. He returned from active duty in 1955 and was a reservist for 4 additional years.

At BIW Russ began as a pipefitter and in 1988 retired as a senior estimator.

In 1971 Russ earned his real estate broker’s license, which became his sideline hobby for 21 years.

Russ always had a boat from the late 1950’s until the late 1990’s. He and Edna greatly enjoyed their boating adventures in Muscongus Bay and on Damariscotta Lake. He drew up plans for and finished building their cottage in 1976. There were many happy days spent with family and friends at the cottage and in their boat.

Russ was a member of the Masons, King Solomon’s Lodge, the American Legion Charles Lily Post #0149, and the Rockland Elks.

After retiring from BIW and enjoying annual winter vacations in Florida, Russ and Edna bought a condo in Venice, Florida where they wintered for 13 years. Loving his home, Russ was outside working on the grounds whenever weather permitted.

Russ was a loving and kind husband, father, and grandfather.

Russ was predeceased by his parents, sisters Dorothy, Genivieve and Laura and brother Thomas.

He is survived by his wife Edna, daughter Heather Audette and husband William, Jr. and grandsons William III (Chip) and Colin and many nieces and nephews.

A funeral service will be held on Tuesday, May 21, 2019 at 1:00 p.m. to be held at Hall Funeral Home, 949 Main Street, in Waldoboro with Reverend Bob Dorr officiating. A reception will immediately follow the service.

Hall’s of Waldoboro has care of the arrangements. Condolences may be shared with the family by visiting www.hallfuneralhomes.com.
Read Less

We encourage you to share your most beloved memories of Russell here, so that the family and other loved ones can always see it. You can upload cherished photographs, or share your favorite stories, and can even comment on those shared by others.

Posted May 05, 2020 at 07:49am
On the first anniversary of Russell's passing, we want you to know that you are in our thoughts and prayers. We hope that the memories of the past give you encouragement for the future as you walk each day with your loved one in your heart. It is our privilege and honor to serve your family.

The FTD Living Spirit Dishgarden was purchased for the family of Russell Creamer. Send Flowers 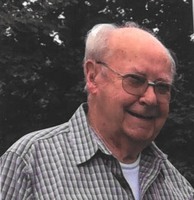