To share your memory on the wall of Sylvia Buck, sign in using one of the following options:

Provide comfort for the family of Sylvia Buck with a meaningful gesture of sympathy.

Print
Sylvia S. Buck, 87, Lincolnville, passed away on May 21, 2019 at Waldo County General Hospital in Belfast following a brief illness.

Sylvia was born on October 17, 1931 in Waldoboro, Maine, a daughter of Otis B. Benner, Sr. and Ida E... Read More
Sylvia S. Buck, 87, Lincolnville, passed away on May 21, 2019 at Waldo County General Hospital in Belfast following a brief illness.

Sylvia was born on October 17, 1931 in Waldoboro, Maine, a daughter of Otis B. Benner, Sr. and Ida E. (Jackson) Benner. Sylvia grew up on family Benner farm in Waldoboro and was educated in Waldoboro schools, graduating from Waldoboro High School in 1949.

In 1951, she married Lawrence Buck of Camden. The couple briefly lived in Warren, and later made their home in Camden where they raised two children. Sylvia moved to Lincolnville in 2004 after Lawrence passed away be closer to her daughter and grandchildren.

Sylvia was a very hard worker all her life and a gifted seamstress. When she was young she had worked as a waitress, the Button Factory, and Sylvania Electric. She later worked at Camden Community Hospital, Van Balen Industries and School House Togs before her retirement.

Sylvia was a beloved mother, grandmother, great-grandmother, sister and aunt who loved her family dearly and she will be deeply missed. She had a special talent for sewing and made many dolls, doll clothes, quilts and special things for her family. She was also a wonderful cook and hosted many parties in her younger years and Sylvia would always outdo herself on Christmas and make her special cookie baskets as gifts for her family until her health made her unable. A thoughtful person, she would always send cards to family and friends. One of her favorite pastimes was talking and reminiscing about her past, including her love to go dancing in her younger years, with her great granddaughter Jackie and looked forward to her visits.

A funeral service for Sylvia will be held on Wednesday, May 29, at 11:00 a.m. at Hall Funeral Home 949 Main Street, in Waldoboro. Burial will be at the German Cemetery in Waldoboro.

To share a memory or story, please visit hallfuneralhomes.com. In lieu of flowers, donations may be made in Sylvia’s name to the Waldoboro Food Bank, P.O. Box 692 or Bangor Veterans Home, 44 Hogan Road, Bangor, ME 04401.
Read Less

We encourage you to share your most beloved memories of Sylvia here, so that the family and other loved ones can always see it. You can upload cherished photographs, or share your favorite stories, and can even comment on those shared by others.

Posted May 14, 2020 at 07:48am
On the first anniversary of Sylvia's passing, we want you to know that you are in our thoughts and prayers. We hope that the memories of the past give you encouragement for the future as you walk each day with your loved one in your heart. It is our privilege and honor to serve your family.

Posted May 24, 2019 at 09:49am
We are going to miss you I loved visiting with you when I could I loved your talks and all your beautiful cards you always sent me at Christmas time you were a beautiful lady and we will always remember you always a special place in my heart for you R I P beautiful lady
Comment Share
Share via: 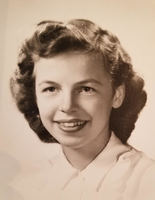