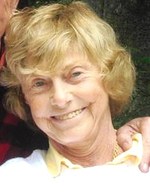 Ellen Brooks Baldwin of New York City and most recently of St.Andrew’s Independent Living and a long time summer resident of Capitol Island, died on July 2, 2019 of complications from an auto immune disease. Ellen was the first daughter of Clarence and Virginia Brooks, born on June 23, 1936.

Ellen attended Walnut Hill School and graduated from Wellesley College, and earned her doctorate in English Literature from New York University, after which she taught at Rosemary Hall School in Greenwich, CT and alter at The College of Aeronautics in Queens, NY.

She married John Baldwin in 1975 and they had two sons, Jonathan and Alan, both of whom now live in the Boothbay Harbor area. Son Jonathan is married to long term Boothbay resident Sarah Hodgdon Baldwin. Ellen’s husband John, who spent his early summers at his family compound at Juniper Point, died in a private airplane accident in 2001. Ellen is survived by three brothers and a sister, Phillip Brooks, her twin Alan Brooks, Richard Brooks and Barbara Benson. Grandchildren, Neal Baldwin, Brady and Violet Baldwin.

While in residence on Capitol Island, Ellen was an active participant in the social life of the island and had many friends. She was a sailor and an avid tennis player, and an active supporter and participant at the Boothbay Region YMCA. She traveled extensively with her mother, and later with her close friend, the late Charles Fassett. Notwithstanding her close connection to Capitol Island and the Boothbay area, Ellen was at heart a New York City girl, and was an avid reader of books and her beloved New York Times. Writer Willa Cather stated there are “Certain unalterable realities somewhere at the bottom of things.” Ellen’s persistent directness and frank questions to those she loved made us all reflect on those realities, “At the bottom of things.”

The family plans a private family graveside service at Decker cemetery on Saturday, July 6 at 11 AM, followed by a reception and sharing at 1 PM at the Capitol Island casino where all are welcome.

In lieu of flowers, contributions in Ellen’s memory may be made to the Southport Memorial Library, 1032 Hendricks Hill Rd., Southport, ME. 04576 or the Boothbay Region YMCA 261 Townsend Ave. Boothbay Harbor, ME. 04538