To share your memory on the wall of Darrell Peaslee, sign in using one of the following options:

Provide comfort for the family of Darrell Peaslee with a meaningful gesture of sympathy.

John liked to work, take care of animals, play his guitar and was an avid collector. John worked for Forrest Peaslee, Jr. for 33 years.

He is predeceased by his parents, a brother, Roger Peaslee and sister, Nancy Hicks.

A CELEBRATION OF LIFE FOR DARRELL WILL BE HELD ON JULY 28TH AT 1:00 P.M AT THE ELKS LODGE , 397 CIVIC CENTER DRIVE, AUGUSTA. FOOD WILL BE PROVIDED. FAMILY ASK THAT YOU BRING A MEMORY TO SHARE.

Condolences may be shared with the family at www.hallfuneralhomes.com
Arrangements are entrusted to the Hall Funeral Home and Cremation Service, 949 Main St. Waldoboro, ME.
Read Less

We encourage you to share your most beloved memories of Darrell here, so that the family and other loved ones can always see it. You can upload cherished photographs, or share your favorite stories, and can even comment on those shared by others. 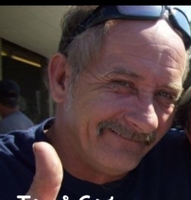