To share your memory on the wall of John Prescott, sign in using one of the following options:

Provide comfort for the family of John Prescott with a meaningful gesture of sympathy.

John held many jobs over the years including meat cutter in Rockland for many years at Sampson’s and IGA, he enjoyed his work as a propane truck driver for Maritime Energy, he raised and sold golden retrievers, and was an animal control officer for the Town of Waldoboro.

He spent summers at Range Campground in Poland for many years. He was an up-front, honest man, who had a soft heart for children.

John was a member of the Lincoln County Fish & Game Club in Waldoboro. He enjoyed cooking, riding his motorcycle, and making homemade candies during the holidays.

In lieu of flowers, donations in John's name may be made to the PenBay Oncology Assistance Fund, 22 White Street, Rockland, ME 04841.

Hall’s of Waldoboro has care of the arrangements. To extend condolences, visit www.hallfuneralhomes.com.
Read Less

Posted Jul 10, 2019 at 03:51pm
Uncle John would hold me way up in the air, upside-down, so I could walk on the kitchen ceiling at camp when I was little. It totally made us giggle and is such a fun memory to get to have. -Jessie
Comment Share
Share via: 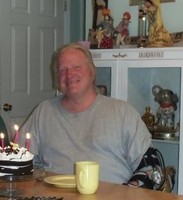