To share your memory on the wall of Gwendolyn Ranquist, sign in using one of the following options:

Provide comfort for the family of Gwendolyn Ranquist with a meaningful gesture of sympathy.

Gwen was a member of the Thomaston Baptist Church. She served
at various times and for many years as a Sunday School Teacher,
Superintendent of the Sunday School, and a Deaconess of the
Church. She also served as the Head volunteer at the Thomaston
Interfaith Churches Food Pantry. She ran the program from its
beginning until she was 89 years young. She especially enjoyed
putting together the Thanksgiving and Christmas food Baskets,
always making sure that there was a little something extra to help
make the Holidays more festive.

Gwen was a Girl Scout Leader in the 1960’s and almost all of her
children participated in Scouting. Gwen was very patriotic. Five of
her brothers served in WWII, while she did her bit at home by
working at the Bath Ironworks Shipyard and in Civil Defense. Her
husband, Charles served in the Army during the Korean War, and
their oldest son Donald served in Vietnam during that war. For this
reason and for a great appreciation for the service of all the Men
and Women who serve our Country, Gwen never forgot our
Veterans. For decades she sewed and shopped. Making lap quilts,
and “ditty bags” for Togus VA Medical Center.

Gwen also made hundreds of baby quilts for the Barbara Bush
Children’s Hospital. For the hours and service Gwen gave to her
volunteer work she received letters of recognition from two
Presidents and from the Governor of the State of Maine.
Gwen was a member of the Weymouth and Penobscot View
Granges. She was also a member of Pomona State Grange. For
many years she had served as the Master of the Weymouth Grange.
In her free time, Gwen collected, mittens, and winter hats for the
Children attending schools in Cushing, Thomaston and St. George.
She has also clipped and collected box tops & soup labels for the
schools and did so until her last month. She worked with the
Grange to donate dictionaries to each student in Grade 5 in those
schools. Gwen was the backbone of her family and her community.
people like Gwen are a large part of what makes living in a small town so special.

Gwen was predeceased by her husband Charles Ranquist; her son
Donald Sturks; both parents, Charles and Myrtle Robinson; her
sister Celia Baron; her brothers, Everett Robinson, Condon
Robinson, Wilbert Robinson, Joseph Robinson, George Robinson,
Charles Robinson Jr, Malcolm Robinson, and Ralph Robinson.
Gwen is survived by her brother Edgar Robinson and wife Cynthia
of Rockland; her deceased son Donald’s wife, Norene of
Thomaston, and their children James, Randy, Kelly and Tracey and
their spouses, children and grandchildren and her daughter,
Beverly Robinson and husband William of Thomaston, and their
sons Richard, William and Scott and their wives and children and
grandchildren; her daughter Diane Bartlett of Thomaston and her
children Marie, Dane, and Diane , (Dee) and their spouses
grandchildren; her daughter Donna Ranquist of Thomaston and her
children Rebecca and Roberta their spouses and children and
grandchildren; her daughter Sharon Cockrell and husband JW of
Florida; her daughter Rosalee Berglund of Tenants Harbor and her
husband John and their children Katie and Quincy and their spouse
and grandchild; and her son Charles Ranquist Jr of Florida and
wife Denise and his children, Micah, Ezra and Jacob and their
wives and grandchildren; And She is also survived by many
nephews , nieces and great nephews and great nieces and
cousins and sisters – in- law, as well as few friends still standing.

A service was held on Friday, August 9th, 2019 at the Thomaston Baptist Church
With a private family Interment directly after the service at the Village Cemetery in Thomaston.
In lieu of flowers the family request donations to be made to the Sussman House c/o Pen Bay Waldo Health Foundation, 22 White Street, Rockport, Maine ,or the Thomaston Interfaith Food Pantry. 124 Main St. Thomaston, ME. 04861.
Hall’s of Thomaston has care of the arrangements.
Read Less

We encourage you to share your most beloved memories of Gwendolyn here, so that the family and other loved ones can always see it. You can upload cherished photographs, or share your favorite stories, and can even comment on those shared by others.

Posted Aug 12, 2019 at 12:03pm
I'm finding it so difficult to believe Aunt Gwen is gone! To look at this photo of her above is to see a person so full of life, joy, spirit, and laughter! Yes, that infectious laughter!! So many memories of her, but especially of that wonderful laugh of hers and that smile! Even though she was a Ranquist by marriage and not by birth, she was every bit a Ranquist, through and through, so evident in her spirit, character, and again, laughter. My heart goes out to all my cousins now who are suffering the loss of their mom, and it is my prayer and sincerest wish for them that their many memories of her are a comfort in the days and months ahead, as well as the knowledge that if love is truly eternal, then their mom loves them still now and through all eternity. We'll miss you, Aunt Gwen, and we love you! You will never be forgotten. Until we meet again...
Comment Share
Share via:
SH

Posted Aug 06, 2019 at 06:54pm
Lifelong memories of Gwen. She loved her family dearly and she had many to love. Gwen was such a joyful presence in my childhood and my friendship with Rosalee; memories of church, memories of mischief. It has been comforting all these years to know that she was still strong and independent in her home on Beechwood Street when so many others on the street had passed on. Thinking of the family with love.
Susan Henry
Comment Share
Share via: 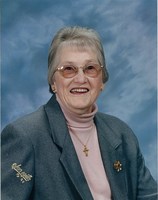