To share your memory on the wall of Shirley Hewett, sign in using one of the following options:

She was predeceased by her husband, her parents, her brother Lyford A. Brown and her daughter Sylvia Jane Hewett.

Shirley is survived by her son, Mark and his wife Francine of Ft. Wayne, Indiana, her sister-in-law Nina Brown of Topsham, as well as several nieces and nephews whom she loved very much.

In lieu of flowers, donations may be made in Shirley’s name to the South Somerville Baptist Church, 8 Hewett Road, Somerville, ME 04348 or to Erskine Academy Annual Fund, 309 Windsor Road, South China, ME 04358.

Hall’s of Waldoboro has care of the arrangements. For online condolences visit www.hallfuneralhomes.com
Read Less

We encourage you to share your most beloved memories of Shirley here, so that the family and other loved ones can always see it. You can upload cherished photographs, or share your favorite stories, and can even comment on those shared by others. 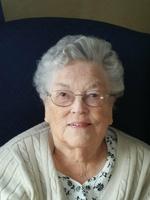