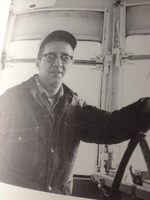 Robert Alan Goodspeed, 90, passed away peacefully on Friday October 11th, 2019, Robert was born on December 25, 1928 the son of the late Glenn and Ruth Wylie Goodspeed. He grew up locally and was a graduate of Boothbay Harbor High School with the class of 1946.
Upon graduating Robert enlisted in the US Navy and served for two years aboard the vessel LC1 (L) 573 in the duty engine room. He was honorable discharge in 1948 and was a recipient of the World War II Victory medal.
After returning from the service he married his High school sweetheart Blanche Hodgdon of Hodgdon Island and the couple was married for 56 years before her passing in 2004.
In 1950 Robert joined the US Army National Guard serving with the Battery B 703 AAA Gun Unit. The unit was called to duty because of the Korean War, Robert spent time at Camp Stewart in Georgia and then to Fort Hancock in NJ to finish his assignment before leaving as a Sergeant First Class upon his discharge in 1952.
Robert was a lifetime member of Bay View Lodge A.F. & A.M #196. He was also a lifetime member and Past Worthy Patron of Crescent Chapter #54 with the Order of the Eastern Star.
Bob held a Coast Guard Captain’s License for passenger vessels as well as 100 ton tugboats.
He spent 24 years as a Captain and Engineer for Winslow Marine. He was hired as an extra when filming of the Carousel was taking place and was hired to skipper the sloop in the scene as it was heading to the clam bake.
Robert and Blanche enjoyed spending time in the garden, camping, and canoeing in Maine’s North Woods.
Robert loved to travel as well whether it was to California to visit Nan and Bill as well as various trips with Maine Line Tours to such places as Niagara Falls, Prince Edward Island, the battlefields of Gettysburg, Amish Country, Nova Scotia and Cape Brenton for the Cabot trail.
Robert was predeceased by his loving wife Blanche Goodspeed
Survivors include
His daughters Marsha Gamage of Southport, ME
Nannette Lee and her husband Bill of Orland, CA
Son Robert, Jr. and his wife Kim of Woolwich, ME
As well as many grandchildren and great grandchildren
A graveside service will be held Tuesday October 15, 2019 at Evergreen Cemetery at 12 noon.
Should friends desire memorial donations may be made to Midcoast Humane, 190 Pleasant Street Brunswick Maine 04011