To share your memory on the wall of Russell Pietila, sign in using one of the following options:

Print
Russell O. Pietila, 66, passed away in his home in Waldoboro, on October 23, 2019 with his loving family by his side.

Russell was born in Savannah, Georgia on November 8, 1952 to Onni A. Pietila and Shirley A. (Nicholson) Pietila. After ... Read More
Russell O. Pietila, 66, passed away in his home in Waldoboro, on October 23, 2019 with his loving family by his side.

Russell worked at Stone & Webster Engineering and other engineering firms until 2010 as a supervisor for the construction, maintenance, refueling and decommissioning of various nuclear power plants across the United States and Canada. Russell had two cruises on his “bucket list” that he was blessed to take in recent years. He cruised the “Baltics” with his wife which included a visit to his family’s homeland of Finland and he cruised through the Panama Canal with his wife, sister and brother-in-law.

He was an avid reader, loved doing yard maintenance, going on cruises, travelling across the United States and Canada, and he loved cooking, especially seafood. In fact, Russell, out of tradition, hosted his family's 50th Annual Lobster Feed this past Labor Day weekend at his home in Waldoboro. Some of his other favorite past times included hunting and deep sea fishing with his father.

Russell was predeceased by his father, Onni A. Pietila and his mother Shirley A. Pietila. He is survived by his beloved wife, whom he always called his “bride” and “honey bunny”, Carol Sodergren of Waldoboro, his dearly loved sister, Linda S. Parenteau and her husband Steve of Windham, his cherished niece Sarah Parenteau of Windham and cherished nephew Marshall Parenteau of Windham; his uncle Clayton Dyer of South Portland and Aunt Helen Pietila of Damariscotta and several cousins.

In lieu of flowers, you can make donations in Russell’s name to the Muscular Dystrophy Foundation of Maine, 39 Mechanic Street, #100, Westbrook, ME 04092 or the Sussman Hospice House, c/o Pen Bay Waldo Healthcare Foundation, 22 White Street, Rockland, ME 04841

We encourage you to share your most beloved memories of Russell here, so that the family and other loved ones can always see it. You can upload cherished photographs, or share your favorite stories, and can even comment on those shared by others.

Love Steve and Candice sent flowers to the family of Russell O. Pietila.
Show you care by sending flowers

Posted Nov 02, 2019 at 08:44am
My heartfelt condolences to Carol, and all extended family members. Russell will be deeply missed. My thoughts and prayers are with you.
Laura Watson
Comment Share
Share via:

Posted Oct 31, 2019 at 10:44am
Carol - Very sorry for your loss, we are thinking and praying for you at this difficult time. Love, Paul and Sandi Watkins
Comment Share
Share via:
JT

Posted Oct 30, 2019 at 08:03pm
My love and condolences extended to Russell's family. Russell, Linda and a bunch of us kids played together in the neighborhood. My father, Joseph Glaude and Onni, Russell's father were also childhood buddies. I remember playing ball games up at the Pietila's, and us kids riding our bikes together. I pray for comfort and love for all of Russell's family in this difficult time. ~Juanita Glaude Thomas
Comment Share
Share via:
DD

Posted Oct 27, 2019 at 01:50pm
Carol, Linda and all the Nicholson family....I am so sorry to learn of Russell's passing. He was a wonderful man and I have so many happy memories with the family up in Waldoboro for the "lobster feed" and other family gatherings. I know he will be missed by many but my heart smiles that he is reunited with Auntie Shirley and Uncle Onni....my love to you all during this difficult time....Deb Dyer
Comment Share
Share via:
LC

Love Steve and Candice purchased the The FTD Comfort Planter and planted a memorial tree for the family of Russell Pietila. Send Flowers 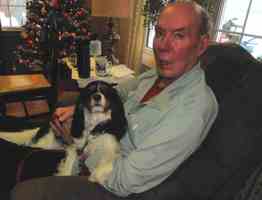