To share your memory on the wall of Robie Wile, sign in using one of the following options:

Provide comfort for the family of Robie Wile with a meaningful gesture of sympathy.

Robie, the only son of Robie and Helen (Simms) Wile, was born June 24, 1928 in Ipswich, MA, where he grew up and attended local schools. In 1947 he married Gertrude MacDonald the mother to his three sons, William, Stephen and Mark. In 1965 the family moved to Maine settling in Waldoboro. Robie operated several businesses over the years, two of which bore the name Wistma, the first two letters of his sons’ first names. Robie was a member of the Friendship Volunteer Fire Department for many years. It was at a Fireman’s Muster that he met Dawn Nicholson who he married in 1979. Robie was a man of many talents and made many friends through his business pursuits and hobbies. He restored several antique cars, including his prized 1927 Dodge Roadster, and participated in many car shows and parades. He also enjoyed model trains and had a large layout that he greatly enjoyed working on. After retiring he and Dawn made a trip across Canada and Alaska, down to the west coast and across the United States in a classic motor home that they restored together.

There will be no public services at this time; the family will have a private service at a later date.

Print
The family will have a private service at a later date.

We encourage you to share your most beloved memories of Robie here, so that the family and other loved ones can always see it. You can upload cherished photographs, or share your favorite stories, and can even comment on those shared by others.

Posted Oct 31, 2019 at 09:35am
i want to give my condolences to the family of robie wile i have good memories of my uncle when i was growing up i remember going to the cottage that robie had and i remember going to his house when he had his saw mill and the old cars he would give us a ride in it i will always remember him i will miss him but never forget him if any of the family wants to get ahold of me my number is 1-910-974-2033 god bless to the family amen from nancy and walter pratt and ken clarke nancys son
Comment Share
Share via: 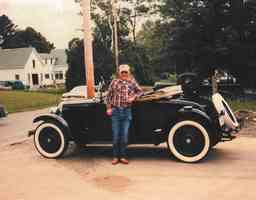