To share your memory on the wall of Conley Simmons, sign in using one of the following options:

Print
Conley Burgess Simmons, 90, of Friendship Maine passed away November 21, 2019 with family by his side at the Sussman House in Rockport Maine.

Conley was born to parents Burgess Lee Simmons and Jennie Frances Simmons on March 31st 1929 in... Read More
Conley Burgess Simmons, 90, of Friendship Maine passed away November 21, 2019 with family by his side at the Sussman House in Rockport Maine.

Conley was born to parents Burgess Lee Simmons and Jennie Frances Simmons on March 31st 1929 in Friendship. Conley was a life- long resident of Friendship. His love for the ocean played a major role in his life. For many years he harvested the sea in his lobster boat the "Lucia Ann" which he himself built with his own two hands. Conley loved to invite family and friends to go out on the sea to fish. Conley loved to eat fresh seafood especially fresh Maine crab meat. Conley's favorite meal was fried clams and haddock shared with friends and family.

In his later years he enjoyed being a self employed painter and wall paper hanger. As he grew older his skills of craftsmanship bloomed in his woodworking shop. Conley and Sarah were known throughout the region as skilled creators of sail boat whirli-gigs and cartoon character lawn runners. Conley also had an amazing green thumb. His home vegetable gardens always provided the family with fresh vegetables season after season.

Conley defined strength and perseverance through tough obstacles in life with the cards he was dealt since his early years on Earth. He inspired every person he met to work hard and stay positive to achieve a happy and healthy life.

There will be no services held at this time.

Print
There will be no services held at this time.

We encourage you to share your most beloved memories of Conley here, so that the family and other loved ones can always see it. You can upload cherished photographs, or share your favorite stories, and can even comment on those shared by others.

Posted Nov 22, 2019 at 08:22pm
Conley and Sarah lived on one end of School St. and my family lived on the other! I have a wooden lobster trap that I got from Conley during Friendship Day one year. I knew Conley most of my life, was good friends with Lanny and Lucia and always stopped to talk to Conley and Sarah when I saw them in Waldoboro, shopping or elsewhere. I hope you rest in paradise Conley, where you undoubtedly being making something beautiful to give Sarah someday when she joins you! Many hugs to you, Sarah and Lanny and Lucia as well. I know it's a difficult time for all of you and my prayers are with the three of you3> 3> 3> 3>
Comment Share
Share via: 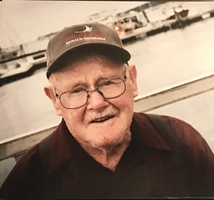