To share your memory on the wall of Richard Cain, sign in using one of the following options:

Provide comfort for the family of Richard Cain with a meaningful gesture of sympathy.

Posted Dec 30, 2019 at 09:18am
Dr. Cain modeled what a mature Christian should look like. He demonstrated it through his love and treatment of his lovely wife, the use of his spiritual gifts to teach and counsel, a willingness to give of his resources and expression of joy and hope. If you wanted to know how close he was to God, you only had to listen to him pray. Richard was a student of the Word of God, he made studying it a priority in his life because it is God’s love letter to His children. While his passing will be missed, he has left behind an example for others to follow. I look forward to seeing him again.

Posted Dec 24, 2019 at 08:31pm
Dr. Cain was a friend mentor and a wonderful doctor. I will miss him terribly. Working at St. Mary’s with him for 24 years...he was the best. How grateful I am the our paths crossed in this life. He was certainly a gift to us all.
Comment Share
Share via:
CC

Posted Dec 21, 2019 at 06:18pm
We will miss you. Thank you for your insight into God's Word and the Medical advice over the years. Until we meet again....
Comment Share
Share via:
GB

Posted Dec 20, 2019 at 07:29pm
Our lives have been blessed by dear Richard. The family resemblance of His heavenly Father was so evident in everything he did. Joanne, Carolyn, Joyce & David your loss of his love & guidance will be so painful, but joy comes in the morning when we have that blessed reunion. We are praying for you with love & wonderful memories. George & Lona Beardsley
Comment Share
Share via:
GM

Posted Dec 20, 2019 at 01:22pm
Joanne and Family. We wish to express our deepest sympathies in the passing of Richard. We know he is with the Lord now.
Glen and I have over the last few years enjoyed his company on our visits in August. Glen also enjoyed bringing him his load of wood. I wish we could come for the services, but, even though I am feeling much better, I think the trip would be a bit too much for me at this time. Joanne, I believe you understand why.
Our love and prayers are with you and the family.
Glen and Marilyn
Comment Share
Share via: 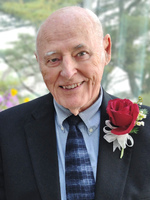