To share your memory on the wall of Reba Pixley, sign in using one of the following options:

Print
Reba Henson Pixley, 89, passed peacefully and went to be with her Lord on Monday, December 9 after her most recent battle with cancer.

Reba Jane Henson was born on May 3, 1930 in Covington, VA to the late Cleston and Eva (Taylor) Henson... Read More
Reba Henson Pixley, 89, passed peacefully and went to be with her Lord on Monday, December 9 after her most recent battle with cancer.

Reba Jane Henson was born on May 3, 1930 in Covington, VA to the late Cleston and Eva (Taylor) Henson. Shortly after she was born, they moved to the Erie, PA. Reba was youngest of six children and was very close to her eldest sister, Blanche, who was twenty years her senior and lovingly took on the role of second mom to young Reba.

After graduating from Harborcreek High School, she worked at Erie Resistor then as a secretary for GE Transportation in Erie, PA for 37 years. She met her future husband, Lester C. Patmore, Jr. at GE and they married in 1956. She took an early retirement while Les continued to work. She was having so much fun they had to purchase a second vehicle. When Les retired, they moved to Peoria, AZ and enjoyed spending time with a large group of friends. There, she began working at Coldwell Banker Success Realty as an assistant for 14 years.

Several years after her husband passed in 1997, she started spending time with Al Pixley who was part of the large group of friends they socialized with. He had lost his wife around the same time that Reba lost her husband. They married in 2003 and moved to Scottsdale, AZ. When Al passed in 2006, she purchased a cottage at St. Andrews Retirement Village in Boothbay Harbor to be closer to her daughter, Lori. She later sold her cottage and moved into Independent Living, then into Assisted Living. She had nothing but praise for all that she encountered in the Village and was a most beloved resident.

To describe Reba, many things come to mind. She was a strong woman with a vivacious personality. She maintained a fun and classy attitude, always the lady, she made friends easily. When she was in a large group of people she didn’t know, you can bet by the time she left she would know many people and they would know more than they’d ever want to know about her daughter and granddaughter!

Reba battled many health issues over the years and always maintained a positive attitude. She was a true fighter and wouldn’t give up this current fight until her granddaughter, Christin, arrived in Maine and was able to see her. She instilled her perseverance character in her daughter who passed it onto her daughter. We have nothing but high praise for the staff at St. Andrews Village, and all the hospice related care she received. They are all true angels and we’re grateful for their service.

Reba will be greatly missed by many. She is survived by her daughter Lori Patmore Bailey, her husband Bill, and granddaughter Christin of Trevett, ME. Stepchildren Lester C. Patmore, III (Donna) of Erie, PA and their children and grandchildren, Thomas L. Patmore (Cas) of Durham, NC and Tom’s children Alexandra and Cristina, and many nieces and nephews.

We encourage you to share your most beloved memories of Reba here, so that the family and other loved ones can always see it. You can upload cherished photographs, or share your favorite stories, and can even comment on those shared by others.

Posted Dec 13, 2019 at 08:31pm
Reba Pixley was my Aunt Reba, younger sister of my father, Amos Henson.
I am only here because Aunt Reba talked my mother, Frances (who had moved to Erie from Oklahoma), into going on a blind date with her brother, Amos. The way my mother told the story, Reba kept after her, telling her what a great guy her brother was, and how she was sure they would get along really well! She was right!
The picture here is just how I remember her, though many of my memories have her with darker hair! I remember her smiling and laughing and always glad to see our family when we would visit.
When my father passed in 1998, my mother was obviously very upset. I heard later my mother was on the phone nearly everyday for months with Reba, to talk and cry and be comforted by Reba. I don't know how I could have ever thanked Reba enough for her love and friendship which kept my mother going that first year after my father died.
In the following years Reba and my mother would call and just talk for long periods about their families. My mother would always call me afterwards to update me on what Lori and her family were doing.
I will very much miss my Aunt Reba. But I know she is with family and friends now who went before her.
My condolences to Lori and her family at the loss of a truly lovely woman.
Comment Share
Share via: 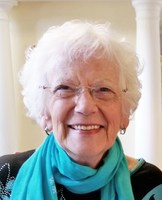