To share your memory on the wall of June Hoyt, sign in using one of the following options:

Provide comfort for the family of June Hoyt with a meaningful gesture of sympathy.

It was in Iowa that June was introduced to George Lyman Hoyt by mutual friends Floyd and Frances Horowitz. Her initial reaction: “He’s very nice, but he’s not my type.” (On Monday, December 23, 2019, George and June would have been happily married for 61 years.)
The Hoyts moved to Indianapolis, Indiana in 1965 for George’s teaching career, and June worked at Larue D. Carter Memorial Hospital until 1972, when the family relocated to Muncie, Indiana. June spent years in Muncie in private practice, retiring shortly before she and George moved to Cushing in 1992.

June is survived by her loving husband George, of Cushing; daughters Katherine Hoyt of Cushing and Elizabeth (Hoyt) Hannibal Drury (husband Creighton Drury) of Hope; grandsons Quillan Hannibal (and friend Katy Kline) of Longmont, Colorado; Cyrus Hannibal (and fiancé Rachel Arday) of Lincoln, Rhode Island; and Evan Hannibal of Vail, Colorado—as well as numerous relatives, friends, and neighbors.
The family would very much like to thank Sandra Sevon Lavoie
for decades of friendship during June’s years in Cushing, and Dr. Mary Ashmore, herself an osteopath in addition to her other credentials, for being June’s physician and friend since 1992.
As well, the Hoyts would like to thank Private Home Care, Inc., of Belfast; P.A.L.S. for Living, of Rockland; and Maine Health Care at Home for compassionate assistance during June’s last days.

June was a life-long reader and yet was stoic about the loss of her eyesight in 2013: Her body failed her, but her mind was sharp to the end. She liked all kinds of people. She loved cats. Per June’s wishes, there will be no memorial.

Hall’s of Thomaston has care of the arrangements. To extend online condolences please go to hallfuneralhomes.com
Read Less

Posted Dec 30, 2019 at 12:40pm
George and Kate. I am very sorry to read of the passing of June. She was a wonderful woman. My condolences. Amy Knowles
Comment Share
Share via: 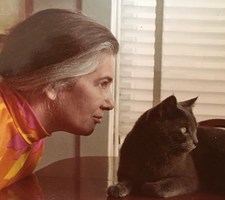