To share your memory on the wall of Corrinna Farrell, sign in using one of the following options:

Provide comfort for the family of Corrinna Farrell with a meaningful gesture of sympathy.

Corrinna was very social and loved to cook for her family and friends. She was funny, charismatic, fun to be around. Her great joy and place to find solace and peace was the beach.

Corrinna was born in Lakewood, NJ on February 13, 1971. Four months later, her parents, Charles and Cathie Farrell, moved Corrinna and her older brother Charles (Tuna) to New Harbor. Not long after, their family expanded when Cathie’s younger siblings, Margaret, Marie, and Patricia Zecchino, came to live with them after their parents passed away. Cathie went on to start “Zecchino’s”, the original Damariscotta sub shop. Tragedy hit in 1984 when Cathie died in an automobile accident. In 1986, Charles married Beth Libby. When their son Lakotah was born, Corrinna had a second brother.

Corrinna graduated from Lincoln Academy in 1989 where she excelled in music. While at LA, she was chosen to be part of a national honors chorus that sang its way across Europe including a concert at Notre Dame Cathedral. She went on to graduate from Dean College in Massachusetts, majoring in voice.

After college, Corrinna gravitated to the restaurant industry. This was in her blood, having been taught to cook by her Mom and from working in the family sub shop. She worked in this industry from Maine to South Carolina.

Moving back to Maine, she worked for UNUM in Portland and then Spectrum Generations in Damariscotta. This was followed by the fulfillment of a dream when Corrinna reopened Zecchino’s sub shop.

In her first marriage that did not last, Corrinna found great joy in being a stepmother to Markie Zaccadelli. In 2011 she met Galen Collamore and they were married in 2017. She became stepmother and friend to his daughter Megan. At the time of her passing, Corrinna, Galen, and their two dogs were living a peaceful life overlooking Hatchet Cove in Friendship.

Corrinna is predeceased by her mother Catherine; her uncles, Michael Zecchino and Glenn Murdoch; and her aunt Rita Nickel. She is survived by her husband Galen Collamore of Friendship and his daughter Megan; her father Charles, stepmother Beth Farrell and brother Lakotah, of Pemaquid Point; brother Charles, his wife Tammy Farrell, and their daughters, Brianna and Erin, of Saco; sisters/aunts Margaret Zecchino of Portland, Marie Zecchino of Michigan and Patricia and her husband Steven Pierce of California; and numerous aunts, uncles, and cousins.

A celebration of Corrinna’s life will be held in the spring with a date to be announced.

Memorial contributions can be made in her name to Midcoast Humane, PO Box 7, Edgecomb, Maine 04556.

Arrangements are entrusted to Hall Funeral and Cremation Service, Waldoboro. Condolences may be shared with the family at www.hallfuneralhomes.com.
Read Less

Print
A celebration of Corrinna’s life will be held in the spring with a date to be announced.

We encourage you to share your most beloved memories of Corrinna here, so that the family and other loved ones can always see it. You can upload cherished photographs, or share your favorite stories, and can even comment on those shared by others.

Posted Jan 17, 2020 at 01:07pm
I haven't seen Corrinna since she was about 2 but followed her life through her aunts and recently through facebook. It should mention in her obit that she was from a line of singers, her mom, grand mother and great grandmother were all awsome singers. She was a beautiful little girl and grew into a very loving woman. I am sure she is one of God's beautiful angels watching and warming us from where ever she is.
Comment Share
Share via:
B

Posted Jan 11, 2020 at 06:37pm
Dear, precious, fun, talented, loving Corrinna... I met her as a student at Lincoln Academy as her choral director. Oh how she loved to sing, and could she ever! I hugged her so hard when she lost her precious mother. A few years later after graduation from college, she studied voice with me when she and I both lived in Portland. That's how we really became true friends, through our love of music, and just from laughing and crying together and being silly too! I had no idea when I returned from Seattle for two weeks at Christmas, that I would see her beautiful smile and face in the obituaries! The Almighty has gained a true giver. She enhanced so many lives, mine included, with her love of life, even through the very difficult times. I am so blessed to have visited with her when I came back to Maine in 2017 to catch up, smile, and hug. So long for awhile, dearest Corrinna. Arriva derci. Until we meet again in the angel choir! I hope talking of her with so much love will help her family members and many friends. Prayers for all of you. Betsey deGroff
Comment Share
Share via: 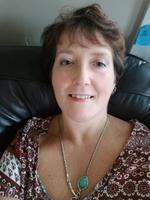 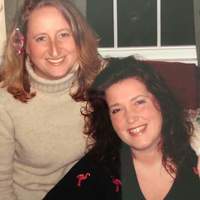 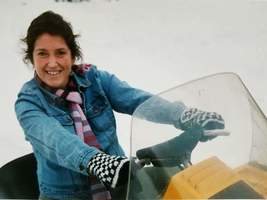 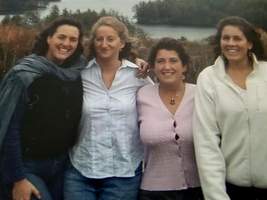