To share your memory on the wall of Merlin Gray, sign in using one of the following options:

Provide comfort for the family of Merlin Gray with a meaningful gesture of sympathy.

Merlin’s post retirement was spent in Boothbay Harbor where he worked at several jobs. He
was a fair weather lobsterman in Linekin Bay, road foreman for the town of Boothbay, and a
contract mail carrier for the town of Southport. Being a lover of sweets, Christmas was his
favorite time to deliver the mail because his many friends along the route would leave treats for
him in their mailboxes. Most knew that brownies were his dessert of choice.

Like many others from “the Harbor”, the Gray’s became “snowbirds” migrating to Stuart and
Port St. Lucie, Florida where they lived until 2012 when they finally came back home to
Boothbay.

Cush, as he was known to many, was a loving father and grandfather, an easy going man with
a great sense of humor, and a people person who never hesitated to give a hug or a handshake
to everyone he met. He had a sharp memory of the many good times throughout his life and
shared his entertaining reminiscences with anyone who would listen. He enjoyed socializing
with friends which in his younger years usually involved golf, music, cocktails and snacks. Lots
of snacks!

Over the past few years he spent happy hours playing cribbage and socializing at the
Community Center and he especially liked gathering with friends and relatives at the various
church luncheons. Last October Merlin was beyond thrilled to be able to go with Honor Flight
Maine to visit the memorials in Washington, DC.

We encourage you to share your most beloved memories of Merlin here, so that the family and other loved ones can always see it. You can upload cherished photographs, or share your favorite stories, and can even comment on those shared by others. 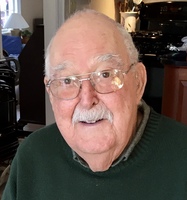