To share your memory on the wall of Richard McArdle, sign in using one of the following options:

Provide comfort for the family of Richard McArdle with a meaningful gesture of sympathy.

He and Joan enjoyed many vacations in New England, where they would rent a cabin on a lake for a few weeks. He loved reading, cooking, and fishing. After the death of his wife in 2014 he came to Maine to visit family, loved it, bought a home, and moved up lock stock and barrel. He enjoyed the outdoors and could often be seen sitting out on his porch having a smoke, watching the wildlife in his yard, and the birds at his feeders. He liked eating out and was a frequent breakfast customer at Debs Diner in Bristol. He enjoyed talking to people and delighted in spinning stories about all sorts of mysterious adventures he'd been on throughout his lifetime.

He is predeceased by his wife, parents and siblings. He is survived by his niece Kim McArdle Harrington and husband Donald Harrington, Bristol, ME, as well as many nieces and nephews in NJ, NV, IL, GA, VA, and CA. He will be missed and fondly remembered by many for the special 'character' that he was.

There will be no services at this time.

Print
There will be no services at this time. 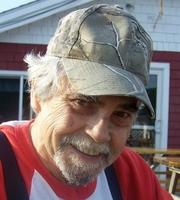