To share your memory on the wall of Heath McPhee-Campbell, sign in using one of the following options:

Provide comfort for the family of Heath McPhee-Campbell with a meaningful gesture of sympathy.

He was known fondly as “Mr. Holly” by his bigger cousin.... Read More
Heath Russell McPhee-Campbell was born on March 5, 2020 at 4:28 a.m. at Miles Memorial Hospital weighing 8.7 oz and 9 inches long to Dustin Campbell and Raina-Cheyenne McPhee.

He was known fondly as “Mr. Holly” by his bigger cousin.

Heath is predeceased by his Uncle Russell “Rusty” McPhee of Waldoboro and many more family.

Services will be held at Halls Funeral Home in Waldoboro on Friday, March 13 at 10:00 AM, officiated by Pastor Tom Rawley.

Hall’s of Waldoboro has care of the arrangements. To extend online condolences visit www.hallfuneralhomes.com .
Read Less

We encourage you to share your most beloved memories of Heath here, so that the family and other loved ones can always see it. You can upload cherished photographs, or share your favorite stories, and can even comment on those shared by others.

Sharon Tait purchased the The FTD Comfort Planter and planted a memorial tree for the family of Heath McPhee-Campbell. Send Flowers 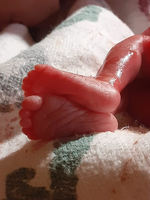