To share your memory on the wall of Gerald Bartlett, sign in using one of the following options:

Jerry was born on May 25, 1936 to Cleo and Grace Bartlett of Washington. He graduated from Union High School in 1954 and married the love of his life on July 12, 1958. For 61 years, Marlene and Jerry lived in the home he built for them, raising their 3 children, welcoming their 4 grandchildren and 5 great-grandchildren, and making decades of wonderful memories together.

Jerry started working for his father’s pulping business while still in high school, eventually taking it over for his father when he passed. He spent most of his life working in the pulp business, eventually passing his fathers business onto his son, Wade. After retiring from the wood industry, he started “The Old Timers” excavating business with friend George Carlezon, which they ran together for over a decade. He was also passionate about buying and selling used cars for nearly 40 years.

Jerry was a member of the Masons of Mount Olivet Lodge #203 and was raised as a Master Mason in 1958. He rose through the chairs and served as Master of the Lodge from 1971-1973. He received his 50-year medal with a gold star, representing 55 years as a member.

Jerry was a true collector at heart, collecting everything over the years from antique cars to 50s memorabilia. He even built an addition onto his home know as his “50s Room,” which housed many of his favorite collections, including a massive restored peddle car collection that was sold as a set to be displayed in a museum.

Jerry enjoyed his life to the fullest. He was happiest when he was spending time with his family, they were his everything. He spent his summers at his family cottage on Washington Pond, inviting all his friends and family over for a big 4thof July celebration every year. He loved his road trips with his son and grandson to Carlisle, spending his weekends browsing car parts and eating good food. He had a passion for food and loved going out to eat with his wife every Saturday night to enjoy his favorites like Prime Rib, Lobster and Oysters on the ½ Shell.

Jerry was loved by many and will be missed by all. In keeping with the families wishes, a private burial will be held in the Spring. Should friends desire, contributions in Jerry’s memory may be made to the Mount Olivet Masonic Lodge #203, 74 Liberty Road,Washington,ME 04574.

Print
A private family graveside service will be held at the Marr Cemetery in Washington in the Spring.

We encourage you to share your most beloved memories of Gerald here, so that the family and other loved ones can always see it. You can upload cherished photographs, or share your favorite stories, and can even comment on those shared by others. 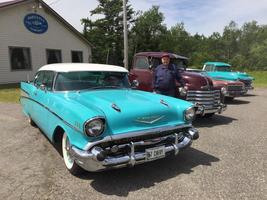