To share your memory on the wall of Richard Gardner, sign in using one of the following options:

Provide comfort for the family of Richard Gardner with a meaningful gesture of sympathy.

In 1983 he and his wife moved to Maine eventually settling in Cushing. Richard and his wife were active in the town of Cushing. He served as a selectman, volunteer firefighter, and plowed the town roads for many years. He had his lobster license, and enjoyed going out on the water with many of his friends.

A service to celebrate Richard’s life will be held at the convenience of the family as it was Richards wish that he be buried alongside his parents in Hanover Center Cemetery in Hanover, MA.

Condolences may be shared with the family of Richard’s book of memories at www.hallfuneralhomes.com

Posted Apr 02, 2020 at 08:58am
Cyndie,
What a wonderful man and father he must have been! My condolences to you and your family.
Lois Buchanan
Comment Share
Share via:

Posted Mar 30, 2020 at 01:10pm
My condolences to the family. I would love to share some bible scriptures that can bring you comfort at this time and a wonderful hope of seeing your love one again. Acts 24:15” There is going to be a resurrection “. 2 Corinthians 1:3,4” Comfort when loved ones die” Hebrews 2:15” Freedom from morbid fear of death” John 5:28,29” A real hope of being reunited with your dead loved ones”. God is the Creator of life. The Bible calls Jehovah God “the source of life” (Psalms 36:9; Acts 17:24,25) The One who gave life to all living creatures is certainly capable of restoring life to someone who has died. Jehovah hates death, he views it as an enemy. (1 Corinthians 15:26) He has a longing to conquer that enemy, to undo death by means of the resurrection. He yearns to bring back those who are in his memory and to see them live on earth again-Job 14:14,15. 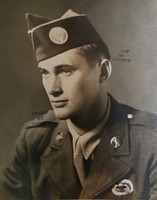