To share your memory on the wall of Leila Barter, sign in using one of the following options:

Leila was born on Feb. 16, 1938 to Alexander & Esther Barter the youngest of eleven children. Leila grew up on Barter’s Island and attended local schools.

Leila married her one true love, Herman D. Reed at the age of 17. They were married for 26 yrs when Herman passed away suddenly on Easter Sunday April 19, 1980. They have 3 children, David Reed of Woolwich, Bobby Reed of Barter’s Island & Jefferson, Shelly Clifford of Edgecomb. Sundays were always spent as a family, either having dinner with her parents on the Island or packing a picnic lunch for a ride across the state of Maine; sometimes ending up in New Hampshire. She loved the idea of going for a ride and continued to enjoy those with family and friends over the years. She made it point to go with Bobby and The Wildhorse Band to various venues across the state where she met and became friends with his many followers. She was considered a member of his band, known as “Mom” to all. She truly was Bobby’s #1 fan. She loved traditional country music and enjoyed every moment spent singing along, listening but most times you’d find her out on the floor line dancing to every song. She was so proud of Bobby’s accomplishments, she followed him to Tennessee for several of his competitions as well as his many award shows throughout Maine.

Leila loved the “old cars”- especially a 1956 Chevy owned by David, her “#1 son” (as he was frequently called)! A true prize possession to David because it was once owned by Herman, and when he passed away David took it over and restored it to its original beauty. She asked him once, “Dave where’s the windshield wipers? It doesn’t go out in the rain Mom!” She loved telling that story! She loved taking the occasional ride in “Herm’s 56” as it is licensed. She took great pride in waving at Dave as he passed her by during the yearly Antique Auto Parade in Boothbay Harbor. She always said, David made that a great tribute to Herman.

For many years she enjoyed pictures of the places her daughter traveled and lived throughout the U.S. She said she saw the country through Shelly’s eyes! One of her favorite places that she was able to visit was San Diego, CA. She made two separate trips to see her granddaughters graduate high school. She loved the sights, sounds, and attractions. When Shelly moved back home after being gone for 40 years, they made a very special trip to Vermont; it was on her bucket list of things to do, she wanted to visit Vermont Country Store. The two of them loved every minute of driving across the countryside, making memories along the way to cherish always.

She loved gardens and flowers; she always said “Spring” was her favorite time of year because things are new and fresh.

She loved walking the Point with her most beloved and cherished friend, Marge (Davis). She always said Marge was the best friend she’d ever had. They both worked together until retirement as custodians at the Boothbay Elementary School.

Leila had many friends and so many family members that she cherished. She is survived by her 3 children:
David Reed & his wife, Brenda.
Bobby Reed
Shelly Reed Clifford & her husband, Jeffrey.

Her sister, Theresa Gilson of Stoneham, MA. and her beloved kitty cat, AJ (Alan Jackson) who now resides with Shelly & Jeffrey in Edgecomb.

Lastly, she had a tremendous love for Angels. Though she wasn’t an overly spiritual women, she believed in God and Heaven.

“An angel lived among us, A gift from God above.
She showered us with kindness And shared
with us her love.”

A Graveside Service for Leila will be announced at a later date at www.hallfuneralhomes.com
Read Less

We encourage you to share your most beloved memories of Leila here, so that the family and other loved ones can always see it. You can upload cherished photographs, or share your favorite stories, and can even comment on those shared by others.

Posted Apr 27, 2020 at 01:02pm
Condolences to Leila's family. Even though I knew her for just a few short years, she had the kind of personality that made you feel like you'd known her your whole life. She was so warm and inviting. Rest in peace my friend. Walk with the angels.
Comment Share
Share via:
AR

Posted Apr 10, 2020 at 03:08am
I remember seeing this beautiful bright soul everytime I went to visit my grandmother at work at BRES. Grammy would always say let’s go to the dungeon and see Leila. Warm hugs and candy! She was the best! My grandmother Marge would always have her over for coffee and a morning walk, sometimes I would join the walk but always had trouble keeping up with them! I never understood how these mature young ladies could “run” and still look so graceful walking! The days I caught her at my grandmothers she would always ask how me and the family were doing... I loved seeing her and Grammy share their special bond and smile over cribbage and coffee
Comment Share
Share via:
R

Posted Apr 08, 2020 at 09:37am
I have know Leila since I was a little kid. I always loved her, she was so kind and loving. My mom, Patsy and Dicky were lifelong friends of both Herman and Leila. Some of my fondest memories were going to Leila’s after supper. They would drink coffee and chat and I would hang with Shelly. I loved her and idolized her. Bobby would sometimes play his guitar. Later in life Leila was a great friend and help to Dicky as his health failed. She cooked for him and checked on him a few times a day.. She comforted me at Dicky’s graveside service. She was a wonderful lady and I will never forget her. My thoughts are with her family..I was especially close to Shelly, whom I thought of as a big sister.
Love ya, Richelle
Comment Share
Share via: 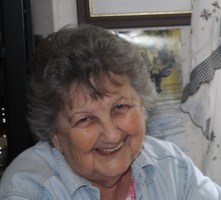