To share your memory on the wall of Edith Bond, sign in using one of the following options:

She attended the Washington Grammar School in Round Pond and Bristol High School in Pemaquid Falls.
She worked for seven years as a dental assistant for Dr. George S. Nevens in Damariscotta after which she worked as a bookkeeper and later an accountant for several construction companies in Maine and Florida.

A private committal service will be held at the Village Cemetery in Jefferson at a later date.

If so desired, donations may be made in Edith’s name to Midcoast Humane Society, 190 Pleasant Street, Brunswick, ME 04011

Print
A private committal service will be held at the Village Cemetery in Jefferson at a later date.

We encourage you to share your most beloved memories of Edith here, so that the family and other loved ones can always see it. You can upload cherished photographs, or share your favorite stories, and can even comment on those shared by others.

Posted Apr 23, 2020 at 08:15am
Linda I am so sorry to hear about your Mom. See was always so sweet and so much fun to be around. She will be missed a lot. Sending love, Donna Brackett Rendo
Comment Share
Share via:

Posted Apr 21, 2020 at 01:57pm
Dear Linda and family and the rest of Edies' family..sincere sympathy to all of you.I got to care for Edie when she spent the winter with us at Hodgdon Green and a last memory I have is her joy when someone donated a bunch of stuffed animals and she got a teddy bear.She often talked of her love of family and friends and would always sit up and smile when I came to her on rounds at night. She would talk about her cats of which she had a painting and photos and we would put her eyeglasses in front of a picture of her parents for the night and would say they are guarding them. Rest in Peace Edie and comfort to her family, Laurie Ann Robbins
Comment Share
Share via: 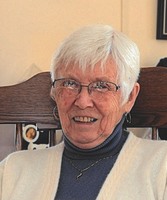