To share your memory on the wall of Nathan Miller, sign in using one of the following options:

Provide comfort for the family of Nathan Miller with a meaningful gesture of sympathy.

Nate was born January 14, 1974 in Rockport, Maine to Marie and Wayne C. Miller. He graduated from Medomak Valley High School in 1992. Nathan never married but had two beautiful daughters, Miranda and Danica Miller.

Nate was a father, son, brother, uncle and cousin but he was most well known as a friend to everyone he met. Nate was rugged and widely known for his physical strength and picking up really heavy things. He was athletic and was a Class A state champion wrestler his senior year. Nathan was a craftsman of the outdoors, especially with wood and rocks. He was woodsman and a jack of many trades. He worked for his dad’s business, Miller’s Firewood, for several years and was a skilled laborer for his brother Jared. Nate worked for himself and so many family relatives, friends and acquaintances. His true talent, love and craft was stone scape and he enjoyed doing walls, fireplaces and walkways.

Nate will be remembered for his funny, friendly and playful nature. He strove to find joy in the simple pleasures in life and was always easily amused by little things. He lived with gratitude and enjoyed the small daily victories. These very traits made him quite lovable to so many and he will be so incredibly missed by all.

He was predeceased by his father Wayne C. Miller who passed in 2015, his oldest brother Brian Miller in 2010, and grandparents George and Madeline Miller, also his great Uncle Spencer and great Aunt Evelyn. We know he was welcomed at heaven’s gate.

Sadly at this time there will be only a private graveside service for immediate family only. But this summer a remembrance celebration at camp will be held.

Hall’s of Waldoboro has care of the arrangements. To extend online condolences visit www.hallfuneralhomes.com
Read Less

Print
Sadly at this time there will be only a private graveside service for immediate family only. But this summer a remembrance celebration at camp will be held.

We encourage you to share your most beloved memories of Nathan here, so that the family and other loved ones can always see it. You can upload cherished photographs, or share your favorite stories, and can even comment on those shared by others.

Posted Apr 28, 2020 at 09:20am
To Jared and family.
Rob & Patty send our deepest sympathy and condolences to you and your family. We had only met Nate a couple times and were looking forward to Jared and Nate sparing with each other while they both helped us out with tasks around and about our home. We were looking forward to having Nate's expertise rebuild our outside stone fireplace and patio. Work was to commence soon with Jared looking forward to working with his brother at his side. Fondly, Rob and Patty Eddy
Comment Share
Share via:

Posted Apr 27, 2020 at 08:15pm
My thoughts are with the whole family. We all had some fun times at camp together. Always a tragedy losing someone, especially when their time on earth was cut so short. He will be missed but will always be part of our conversations of our childhood at camp.
Comment Share
Share via:

Posted Apr 27, 2020 at 06:09pm
I am so sorry to see of Nate’s passing. I have so many fond memories at camp during the summer on Damariscotta Lake with Becca, Little Wayne, and Nate when we were all a little younger. My heart goes out to his entire family, I’ll keep you all in my prayers.
Comment Share
Share via: 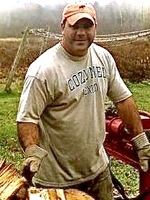