To share your memory on the wall of Evelyn \"Eve\" Anderson, sign in using one of the following options:

Print
Evelyn Gordon Anderson, loving wife, mother, and grandmother, passed away in her home at the age of 84 on Saturday, May 30, 2020. Evie was born on February 24, 1936 in Yonkers, New York to Nathan and Gertrude Gordon.

She was educated in... Read More
Evelyn Gordon Anderson, loving wife, mother, and grandmother, passed away in her home at the age of 84 on Saturday, May 30, 2020. Evie was born on February 24, 1936 in Yonkers, New York to Nathan and Gertrude Gordon.

She was educated in Yonkers public schools and attended Russell Sage College in Troy, New York, where she met her husband Olof Lennart Anderson. They married on June 17, 1956 and settled in Manchester, Connecticut the following year. She is survived by Olof, her two children, Elizabeth and Andrew Anderson, and three grandchildren, Shulamith Jacobi, Benjamin Jacobi, and Bethany Roby. Many others called Evie “Mom” because she deeply loved and cared for them throughout her life.

Evie was active in several communities. While living In Manchester, she was campaign manager for Olof, who was elected to the Manchester City Council for one term. She ran the Manchester campaign office for Rep. Emilio “Mim” Daddario in 1966, and was a delegate to the Democratic State Convention. She served on a committee to establish Manchester Community College, which has grown to 3,000 students. She also served on a committee to recommend accommodations for the disabled at Lincoln Center in New York City

Retiring with Olof to Thomaston in 1990, Evie served the community in many capacities.
She served on committees for Watts Hall, the General Henry Knox Museum, and upgrades to the
Thomaston downtown business district. She was a member of the Board of Bay Chamber Concerts. As President of the Thomaston Historical Society, she enlarged its building to complete its original footprint, and added climate-controlled storage of historical documents. Evie also transcribed the family letters of Thomaston resident and Maine Rep. Jonathan Cilley, which was published as A Breach of Privilege: Cilley Family Letters 1820-1867 (Seven Coin Press, 2002), and which won an award from the American Booksellers Association.

Those who knew Evie may leave memories and condolences at hallfuneralhomes.com, where a memorial service will later be announced for a date when conditions permit larger gatherings and hugs.

Should friends desire the family has requested that donations in Eve's memory be made to Thomaston Historical Society, P.O. Box 384, Thomaston, Maine 04861.

Hall's of Thomaston has care of the arrangements.
Read Less

We encourage you to share your most beloved memories of Evelyn "Eve" here, so that the family and other loved ones can always see it. You can upload cherished photographs, or share your favorite stories, and can even comment on those shared by others.

Posted Jun 11, 2020 at 11:08am
Dear Olaf, children and grandchildren: With sadness, we have learned of the passing of our dear classmate, Evie. Ralph and I send sincere condolences to you. We admire the life and courage that Evie displayed and lived. Evie and I had plans that we were to visit her this summer/fall in Thomaston. God saw otherwise. She is in Heaven with Him. We remain with fond memories of our beautiful classmate. I remember back to our high school days and the following reunions with much appreciation in seeing Evie and you, Olaf, at the reunions. She is forever in my heart. Sent with love and prayers,
Margie Giuliani Wuebker and Ralph Wuebker
Comment Share
Share via:
MK

Posted Jun 08, 2020 at 09:19pm
Dear Olaf,
I don't know if you remember me, I am Ellen Kalman's Mother. I read about Elizabeth receiving the MacArthur Genius Award last year and was able to contact her to send my congratulations. I think of that skinny teen who spent time in my home and what she accomplished, I just had to contact her. Now I read the sad news of Eve's passing and again I contacted her. I told her how Eve and I used to joke about our husband's appearances. We both felt that my Jewish, blue-eyed, blonde, almost 6'1", broad shouldered husband looked more stereotypical Swedish. Elizabeth thought you might like to know that. I've also been thinking of your Mom the past few days. She was one amazing Girl Scout leader!!!!

Posted Jun 08, 2020 at 06:45pm
Aunt Evie was there as family at my beginning, but in her ending leaves me bereft of a dear friend as well as matriarch. Throughout my childhood, times spent at Aunt Evie's and Uncle Olof's home were characterised most of all by the magical - with every mealtime a feast, every corner inhabited by items beautified through creativity and care. My lifelong personal favourites: devilled eggs served up with devilish glee, and shell-shaped soaps bringing the seaside to the sink , plus a particular sort of shimmering tinsel which I have never found draped on anyone else's tree. I remember one little-girl Christmas Eve when Liz and I were convinced we heard sleigh bells - and the remembered sound merges in my memory with that of Aunt Evie's distinctive full-toned laugh.

But the deepest magic occurred in these last handful of years, as our email correspondence gradually expanded into a near-weekly exchange, and we found our minds meeting as mature women. Our generations converged across geographic distance, as my entry into senior years coincided with Aunt Evie's exiting phase. I shall always be grateful for her supporting shoulder, listening ear, and guiding hand which accompanied me with a completely accepting and affirming spirit through some of my most difficult adult life decisions. Never judging, always encouraging, her email-letters provided springboards for my pondering and sounding boards for my problem-solving.

Genetics have given me features which part-mirror hers and Uncle Olof noticed that our footsteps matched for pace and pitch. I can only wish to follow in hers for bravery and positivity, learning and loving. What I wouldn't give to hear that voice calling me sweetheart one more time, my best loved, most precious antique aunt.

Posted Jun 07, 2020 at 02:21pm
I HAD THE PRIVILEGE OF ALSO BEING A HIGH SCHOOL GRADUATE WITH EVIE AT YONKERS HIGH IN 1954. WE EVEN WENT OUT ON A NEW YEARS DATE. MOST IMPORTANT IS SEEING THIS WONDERFUL WOMAN WHO DISPLAYED HER HIGH INTELLIGENCE ,ACCOMPLISHMENTS, COMPASSION, LOVING, SHARING HER LIFE WITH SO MANY OTHERS. WE BECAME VERY CLOSE FRIENDS IN THESE PAST YEARS COMMUNICATING BY PHONE AND HER PASSING HAS LEFT A DEEP HOLE IN MY HEART.
I CAN ONLY IMAGINE THE LOSS THAT HER FAMILY IS ENDURING. I KNOW THAT SHE IS AT PEACE IN HEAVEN WITH THE LORD, BUT HER PRESENCE HERE ON EARTH WILL BE HEAVILY MISSED!
DEAR EVIE WE LOVE YOU AND MISS YOU - MAY YOUR SOUL REST IN PEACE WITH GOD!
-YOUR FRIEND BERT SOLOMON
Comment Share
Share via:
IK

Posted Jun 07, 2020 at 10:48am
Dear Olof, children and grandchildren,
I was Evie’s Best friend since evenbefore kindergarten days; we told each other our utmost secrets. She included some funny tidbits about me in one of her early books about her family. I loved her.

A few years ago when I thought she was dying I traveled from my home in Ardsley New York to her home to be with her and hug for the last time.

Our correspondences lessened over the years but we always remembered each other’s birthdays and our love for each other-never waned. She adored my husband stuart who died this past August.
You cannot imagine how sad I am. She was so much part of my past.
Although I don’t have the great memory that Evie had, I do have a lot of remembrances i’d love to share with you and think you might like to hear. I’m not sure whether Olof has my new address If Valhalla NY, but certainly you can email me if you’d like to make contact.

P. S. I believe that Elizabeth was friendly in college with Lisa Gross, yes? 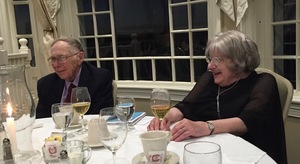 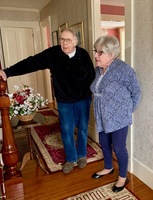 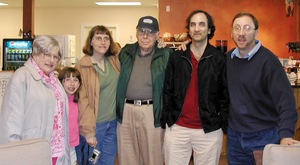