To share your memory on the wall of William Sanborn, sign in using one of the following options:

William joined the Army in 1957 and was discharged in 1963. After the service he held many jobs including being a full-time father, working at Martin/Marietta Cement Plant, an associate at Walmart, Brooks Lumber Mill, a security guard at National Sea Products, a caregiver at The Holmstead, and a fisherman.

He enjoyed family time, camp fires, singing, fishing, going on car rides in the country. He was a loving, funny, tell it like it is kind of a guy, would help anyone, and loved watching animals and birds and the beauty of nature.

Arrangements are entrusted to Hall Funeral and Cremation Services, 949 Main Street, Waldoboro,
Maine. Condolences for the family may be shared on William’s Book of Memories at www.hallfuneralhomes.com.
Read Less 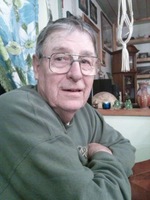