To share your memory on the wall of Shirley Hodder, sign in using one of the following options:

In early 1959, she met and married fellow Raytheon employee Alan (Al) Hodder. They settled in Burlington Massachusetts where they went on to raise three children in a loving and supportive environment. The Hodder household was special for many people. Shirley and Al became "second parents" to many of their children's friends and became known for the annual Christmas Eve/Birthday Open House Celebration to which anyone and everyone was invited. Shirley also became active in local community theater, becoming a Lifetime Member of The Burlington Players.

Shirley and her family spent some of their happiest times on the sands of Hampton and Seabrook NH beaches. In 2005, they decided to retire to Portland, Maine. They became fixtures in the city’s restaurant scene and were “adopted” by countless staff members who officially labeled them Portland's "Cool Couple”. After the death of her husband in October 2018, Shirley relocated to East Boothbay, Maine to live with her daughter and son-in-law for what would be her final months.

We encourage you to share your most beloved memories of Shirley here, so that the family and other loved ones can always see it. You can upload cherished photographs, or share your favorite stories, and can even comment on those shared by others.

Posted Jun 26, 2020 at 12:45pm
MJ and Toni ,
So so very sorry for your loss. Thoughts and prayers are with you both.
Mike and Sue Regino
Comment Share
Share via: 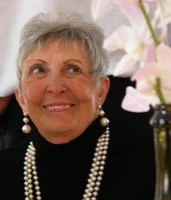