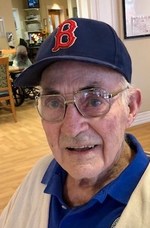 He was born in Boothbay Harbor on March 9, 1928, the third child of Erville J. and Ethel Gilman Wallace. While he loved to travel, Boothbay Harbor has always been his “home”.

Family, travel, adventure and the outdoors were central to his life. Within days of graduating from Boothbay Harbor High School, he entered the Merchant Marines, and was aboard a tanker ferrying bunker fuel to the Pacific when World War II ended. His vessel was then rerouted to the Mediterranean where it and others transported various cargoes. He liked to remind family that he celebrated his eighteenth birthday in Rome, and often told engaging stories of the cargoes he had carried and the ports that he visited.

Returning to Boothbay Harbor between voyages, he met the former Eftemia Kessaris of Beverly MA, who was summering in the region, and they were married in 1949. He retired from the sea after the birth of his two children to pursue a career in carpentry. Like many in the Region at that time, he and his family relocated to the Florida east coast annually for a several years, where he worked in shipyards during the winter. The week-long travel back and forth provided many memorable family adventures.

After settling permanently back to Maine in the early 1960’s, he refocused his business on roofing, which had a key strategic advantage. Being somewhat seasonal, it allowed a mid-winter opportunity to travel, and increasingly provided time to enjoy the great Maine woods. He was a successful trapper and a life-long hunter, and it seemed that he could drive virtually every back road in Maine without a map.

He and Effie acquired the Harborage Inn in the early 1970’s, which she ran for over 30 years, while Brud, as he was know to many, managed several rental properties in his later years. He was a rather meticulous landlord, and significantly improved and maintained the properties they owned. He was also not above giving his tenants advice about how they were expected to treat their rentals. He and Effie continued to travel winters, and were able to visit every continent except Antarctica.

He was predeceased by his wife Effie, an older brother, also named Robert, who died before he was born, and his brother Richard Wallace (Mary) of Boothbay Harbor. He leaves his daughter, Laura Chapman (Philip) of Boothbay Harbor, and their children, Kristie Chapman of Boothbay Harbor and Troy Chapman (Emery) of Newcastle, and his son Robert Wallace, Jr. (Janice) of Milton, MA and East Boothbay, and their children, Robert Wallace III (Christine) of Boston, Anne Wallace of Milton, MA and Dr. Ellen Wallace of San Jose, CA. In addition, he leaves his sister Genevieve Earle of Northborough, MA, six great-grandchildren, his dear cousin Carol Ann Wallace Ring and many nieces and nephews. At his request, there will be no funeral, but he would be pleased if those who knew him were to raise a glass in his memory.