To share your memory on the wall of Judith Grant, sign in using one of the following options:

Judith was born on May 3, 1943 in Bowdoinham, the daughter of Charles O’Neil and Eleanor Fowler O’Neill. Judith grew up... Read More
Judith F. Grant, age 77, passed away on Monday, July 13, 2020 at LincolnHealth – Miles Campus in Damariscotta.

Judith was born on May 3, 1943 in Bowdoinham, the daughter of Charles O’Neil and Eleanor Fowler O’Neill. Judith grew up everywhere and moved to Waldoboro in 1981 after buying her home.

She was very involved in the fishing community and knitted potheads and helped buy elvers with her son Chris. She also worked at Metal Magic with her husband making plenums. In the winter months she could be found making wreaths and helmet covers. She was always doing something. She could sit for hours picking crabs and drinking coffee with her friends. She loved to read books and would have three going at once. She had a passion for cooking and handed it down to her daughter. She loved flowers and had many gardens to show it. Her house was open to everyone and she was known as the neighborhood mom. Everyone loved her.

Judith is predeceased by her husband, Edwin K. Grant and her son James Franklin Penn.

We encourage you to share your most beloved memories of Judith here, so that the family and other loved ones can always see it. You can upload cherished photographs, or share your favorite stories, and can even comment on those shared by others. 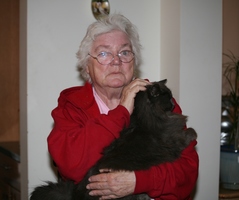