To share your memory on the wall of Drew Butler, sign in using one of the following options:

Print
Drew Butler, 62 of Waldoboro passed away unexpectedly on July 27, 2020 at his summer camp in Union. Drew was born in Rockland, Maine to Richard Butler and Sarah (Hartford) Butler.

He grew up in Warren and attended local schools. He g... Read More
Drew Butler, 62 of Waldoboro passed away unexpectedly on July 27, 2020 at his summer camp in Union. Drew was born in Rockland, Maine to Richard Butler and Sarah (Hartford) Butler.

He grew up in Warren and attended local schools. He graduated from Medomak Valley High School in the Class of 1976. He met Susan Vannah in high school and later they married.

Drew worked with his uncle as a painter before beginning his career at Bath Iron Works as a supervisor in the painting department until his retirement in December of 2019.

He coached Little League for many years, and followed his kids on Little League and Babe Ruth teams. He played on several men’s softball teams, including Sirius Graphics, Boggs, The Hitmen and Crowe Rope. He loved snowmobiling, hunting, fishing, boating and all types of outdoor activities. He was always active, leading by example, “no excuses!” Drew got along with everyone. His home was open to all. He enjoyed working on projects with his grandchildren.

We encourage you to share your most beloved memories of Drew here, so that the family and other loved ones can always see it. You can upload cherished photographs, or share your favorite stories, and can even comment on those shared by others.

Guaranteed hand delivery by a local florist
AS

Posted Aug 04, 2020 at 12:01pm
Susan, Our hearts are breaking for the loss of Drew. He made us all feel welcome every time we came to visit! He will be missed! We love you so much

Posted Aug 03, 2020 at 06:03pm
Susan, Jency, Zachery and all the Butler family my deepest condolences to you all. Drew was one of a kind, a special person, a good friend who would always have my back. I have great memories of him when we were young, going over to his house playing baseball with all the local crew, watching the Celtics, water-skiing up to the camp and riding in his GTO just to name a few. We all loved playing sports with him, he excelled at any sport he played, he wouldn’t settle for losing and would never ever give up. At times it seems he could will himself to win, it was just a joy to watch him play. Of course we did get in trouble from time to time with that car of his but he always had a knack for getting us out of trouble. A good man and true friend whose friendship I will deeply miss. God Bless!
Comment Share
Share via:
SE

Posted Aug 03, 2020 at 10:03am
Am so sad to hear this news. I have wonderful and funny memories of us growing up together. He had the talent to always make people laugh and smile. Will miss you dear friend.
Sherry Edwards-Drowatzky
Comment Share
Share via:
AG

Posted Jul 29, 2020 at 07:55pm
So sorry to hear of Drew’s passing.Our deepest condolences to Susan,Jency,Zach and the Butler family,you are all in my thoughts during this difficult time.
Amy &Dean Grierson
Comment Share
Share via:
WS

Posted Jul 29, 2020 at 04:25pm
So sorry to hear of Drews passing, I have fond memories of Drew. Played all the sports together through high school, even did some hunting together. He was always a good friend . All the best to his family. 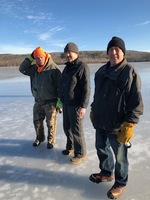