To share your memory on the wall of Audrey Griffin, sign in using one of the following options:

Audrey met her future husband Herbert Griffin while he was a patient at Eastern Maine General, and they married on September 9, 1950. After Herb completed his studies at the University of Maine at Orono, Herb and Audrey lived in Cleveland, OH; New York City, NY; and Boston, MA; before settling in Maine. They were faithful members of the congregational church of Augusta where they lived for approximately 35 years: Audrey spent many years caring for the elderly as a nurse in several nursing homes in the Augusta area before retiring in Union. Together, they raised four children: Dale (Pat O’Connell) of Evanston, IL; Wayne (Kathy) of Chippewa Falls, WI; David (Karen) of Tacoma, WA; and Martha of Union, ME. Prior to retirement in 1988, Herb and Audrey bought 12 acres of land in Union and later built their retirement home there, the log home of their dreams overlooking sunsets over Seven Tree Pond.

Audrey was a longtime member of the People's United Methodist Church, a voracious reader, a passionate knitter, and an active member of the community in Union. Audrey was the perfect example of a selfless servant, always making sure her husband and children were cared for before considering her needs. Audrey’s memory will be cherished by her four children, nine grandchildren, thirteen great-grandchildren, and many friends.

A celebration of life service will be held in the spring of 2021, to be announced.

Arrangements are entrusted to Hall Funeral Home, 949 Wiscasset Road, Waldoboro. Condolences can be shared with the family at www.hallfuneralhomes.com
Read Less

Print
A celebration of life service will be held in the spring of 2021, to be announced.

We encourage you to share your most beloved memories of Audrey here, so that the family and other loved ones can always see it. You can upload cherished photographs, or share your favorite stories, and can even comment on those shared by others.

Guaranteed hand delivery by a local florist
A

Posted Aug 23, 2020 at 08:12am
So sorry to read of Audrey's passing....I will miss her. Having met Audrey and Herb many years ago..before their new home was built,she has been a joy to see . They drove in our yard for my husband do some work on their new property. She and I bonded on Audrey and Audrey. It would make us laugh ! She was a dear to me...is sad . May all R.I.P. together. Thinking of you all. Audrey Wiley Appleton, Me.
Comment Share
Share via:
CH

Posted Aug 19, 2020 at 10:23am
Way back in 1962, I was a young mother who'd just moved back to Maine after several years "away." I was invited by Audrey to join the Open Circle, a newly formed church group for younger women in the Augusta area. Audrey was our "den mother" and made sure we all knew each other's names and socialized more than did projects. She was always aware that we were busy with young children and made sure the group didn't add work for us. Audrey was gracious, soft-spoken, smart and generous as she remained all her life. Imagine my surprise and delight, when after going our own ways for nearly half a century, I found her and Herb to be neighbors at our Washington Pond home. Our friendship blossomed all over again. We will miss her and always remember her fondly.
Charlotte Henderson and Jere Davis

Posted Aug 19, 2020 at 09:41am
To the family, my heartfelt condolences for your loss. Please find comfort in the knowledge that God promises to end all suffering. Before long, God will wipe out every tear from our eyes, and “death will be no more, neither will mourning nor outcry nor pain be anymore. The former things have passed away.”(Rev. 21:3,4). May this promise from God give you comfort now and a real hope for the future. My deepest sympathy. 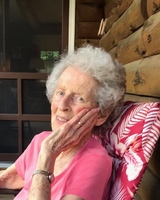