To share your memory on the wall of Jack Bremer, sign in using one of the following options:

Married 24 years to his amazing and loving wife Sus... Read More
Jack M. Bremer 91, of Boothbay quietly passed away at home on Friday Aug. 14, 2020.
He was born in New York City on December 11, 1928 the son of Clark Bremer and Gladys McClellan.

In 1950, upon graduating from Lafayette College, Jack began his career with Aetna Life & Casualty Insurance Company. He later became a top producer for Fuller Brush Company and was promoted to Field Manager, focusing on the development of various employee training programs. In 1971, Jack earned his Master of Education Degree from the University of Maine and then became principal at Bremen and Nobleboro elementary schools and Manchester High School. In the mid 1970's, Jack started Bremer Realty in Ridgewood, NJ. He partnered with Bill Abbott in 1981 forming Abbott & Bremer Realty which was later purchased by Coldwell Banker in 1987. Jack's focus was always on effective company advertising, agent training and "Service Beyond the Sale".

Jack was compassionate and generous with his time and resources. He was a lifelong learner and loved theatre, music and art in all forms. He was an avid reader, great listener, story teller, and had a wonderful sense of humor. His knowledge of cinema and actors and the best movie quotes was encyclopedic. For Jack, there was no time better spent than when watching a great film with Susan or other family members. He was an ardent and expert New England sports fan, always current on team strategy and game outcomes for his Patriots, Red Sox, Bruins and Celtics. He loved all of New England, but Maine called his heart, always exploring new towns, restaurants, antique stores and vistas across our beautiful state with Susan at his side. He loved his family and always looked for ways to interact with each individual in unique and special ways. He held friends close and for a lifetime. He loved animals and gave to many causes in support of their care and preservation. Closest to his heart were his beloved and pampered Maine Coon cats Condo and Moxie. Jack dearly loved his West Coast Larkin Family who returned that love in so many ways.

There is no visitation at the family’s request. A small graveside service will be held 2PM Friday 8/21/20 at Evergreen Cemetery, Boothbay Maine. In lieu of flowers, contributions in Jack’s honor can be made to the following organization he felt great affection for: Paws Cause c/o Boothbay Animal Hospital 285 Wiscasset Rd. P.O. Box 178 Boothbay, ME 04537
Read Less

We encourage you to share your most beloved memories of Jack here, so that the family and other loved ones can always see it. You can upload cherished photographs, or share your favorite stories, and can even comment on those shared by others.

Posted Aug 18, 2020 at 03:46pm
Sending my deepest condolences to Jack’s family, near & far, especially to my dear friend Susan, during this time of grief & the celebration of Jack’s life!😷🙏💕
Comment Share
Share via: 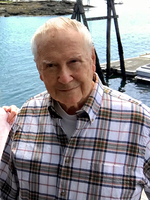