To share your memory on the wall of Henry Rowe, sign in using one of the following options:

Print
Henry C. Rowe, 88, of Boothbay, Maine, passed into the afterlife on October 9, 2020 in the company of his loving family.

Henry Carlton Rowe was born on July 6, 1932 in Brooklyn, NY to Oler (John) and Helen Rowe (nee Patac), the second of... Read More
Henry C. Rowe, 88, of Boothbay, Maine, passed into the afterlife on October 9, 2020 in the company of his loving family.

Henry Carlton Rowe was born on July 6, 1932 in Brooklyn, NY to Oler (John) and Helen Rowe (nee Patac), the second of five children. At age 5, Henry moved to Boothbay, Me., where he lived the majority of his life in the family home on Back River Road. He graduated from Boothbay Harbor High School (BHHS) in 1950, in a class of 50 students (the “Nifty Fifty”). His accomplishments at BHHS included editing the school newspaper, being in the drama club, and playing wide receiver for the football team, where he was renowned for catching every forward pass thrown to him (i.e., 1).

Upon graduation from BHHS, Henry enrolled at the Maine Vocational Technical Institute in Augusta, Me., where he studied Radio-TV repair. With the advent of the Korean War, he joined the U.S. military in 1952. Given advance notice that he was to be drafted into the Army on a Monday, Henry instead chose to enlist in the Navy on Friday. Under a Navy program, Henry received his Bachelor's Degree in Electronic Engineering from the University of Illinois in 1963, and his Master's Degree in Engineering Administration from George Washington University in 1971. His education enabled him to rise to the rank of Lieutenant Commander during his 32 years of active and reserve duty in the Navy.

In the spring of 1953 while serving at the Naval Station Great Lakes near Chicago, Il, he met his wife-to-be, Grace H. Byczynski, at a USO Dance. They were married in Chicago on 11 July 1959, and stayed in love for 52 years, until Grace’s passing in 2012.

Henry & Grace moved to the suburbs of Washington, DC in 1963, where they had two children, Christopher and Cheryl, before Henry’s job with the Central Intelligence Agency (CIA) took the Rowe family on two foreign assignments. Henry was responsible for U.S Embassy communications in London, England in the late 1960’s, and was the Chief Engineer in Okinawa, Japan in the mid-1970's.

In the book "The Billion Dollar Spy," author David Hoffman recounts the CIA's use of one of Henry's inventions. He designed and built a life-like, jack-in-the-box mannequin that quickly inflated from a suitcase. When inflated in a moving CIA car, the mannequin fooled the pursuing Russians into thinking their target was still in car, when in fact the target had been exfiltrated from the car, and 'replaced' by the mannequin.

In 1977 the Rowe’s moved back to Annandale, VA until Henry retired from the CIA in 1982 and returned to his childhood home. Henry’s retirement was marked by tireless service to civic, political and religious organizations in the Boothbay region. Some of Henry’s accomplishments included being the Chaplain for the American Legion’s Post 36 and working their Sunday breakfasts to raise funds for the construction of a new hall. Henry served multiple terms as a Boothbay Selectman. He was treasurer at Our Lady Queen of Peace Catholic Church in Boothbay Harbor, and co-founded the church's folk choir with Grace.

Henry was proudest of two accomplishments that will forever leave a mark on the town of Boothbay. Working with the Boothbay Civic Association, over $250,000 was raised to purchase the land and build the Boothbay town hall. In service to the less fortunate, he established an informal social group of men dubbed “The Woodchucks” in 2008. The Woodchucks worked to gather, split, store and distribute donated wood to those in the area who depended on firewood for their wood stoves during the cold Maine winters. The Woodchucks were recognized by Governor Paul LePage for their civic commitment to serving the community.

Throughout his life, Henry explored a broad array of interests. He mapped the Rowe family genealogy back to the early 1600’s in England, and the Byczynski family tree back to the 1700's in Poland. Henry & Grace then went to Poland in the early 2000's to visit Grace's ancestral home. He and Grace engaged in tracking their walks along Back River Road, logging over 7,500 miles by his 73rd birthday. He also became an avid recycler of bottles and cans. He was a New England Patriots and Boston Red Sox fan.

Henry was pre-deceased by his wife Grace, sisters Virginia Blake, Nancy Downing, Patsy Barter and Shirley Webb. He is survived by son Christopher Rowe of Ashburn, VA, and daughter and granddaughter Cheryl and Angelica Rowe of Lorton, VA.

In lieu of flowers, donations can be made to in Henry’s name to the Boys and Girls State Program at American Legion Post 36, P.O. Box 874, Boothbay Harbor, Me. 04538. In addition, the Rowe family requests that you share a special memory or anecdote you have about Henry, and your interactions with him – something that brings a smile to your face when you think of him. These will be gathered and displayed during a post-COVID 19 celebration of Henry’s life in 2021. Please send your memories to Christopher at cbrowe21@yahoo.com, or at 44074 Ferncliff Terrace, Ashburn, VA 20147 or Cheryl at angelgirl115@verizon.net, or 6702 Red Bird Woods Ct, Lorton, VA 22079

Henry's last words to Angelica were "no tears, no sighs, no sad goodbyes." To our loving Father/Pop-Pop, may you peacefully rest with the Lord our God and be eternally united with Grace, the love of your life. We will miss you forever!
Read Less 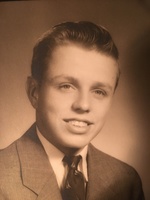