To share your memory on the wall of Ronald Ralph, sign in using one of the following options:

Ron was born, raised and educated in Waldoboro. He married his high school sweetheart, Claire Muzroll Ralph. They were married for 71 years until her passing in Fe... Read More
Ronald E. Ralph, 91, died November 24th at the Sussman House in Rockport.

Ron was born, raised and educated in Waldoboro. He married his high school sweetheart, Claire Muzroll Ralph. They were married for 71 years until her passing in February 2019. Ron was a two sport star in baseball and basketball lettering for four years. He had a try out with the Brooklyn Dodgers.

Ron and his sister, Helen Ralph Eugley owned Ralph Chevrolet for 40 plus years.

As an avid harness racing fan/owner , Ron was President of Lewiston Raceway for over 20 years and the Director of the New England branch of the United States Trotting Association (USTA) for over 50 years. He was voted to the New England Horsemen Hall of Fame in 2011. He was named “Man of the Year” by that organization in 2011. He owned many good race horses, but the highlight of this harness racing career was a horse named Indianapolis. “Indy” broke the record held famous trotter Greyhound for the previous 50 years.
He was one of the founding members of the Waldoboro Little League and coached the Panthers for 10 years, winning 6 titles (He always said that the secret to his winning was to always have good catchers). He coached Waldoboro Babe Ruth with his good friend, Dennis Graffam for three years, winning the state championship the last year of their coaching together.

Ron was also the oldest living member of the Waldoboro Lion’s Club and was a member of King Solomon’s Masonic Lodge.

Ron and Claire had a passion for travelling, visiting 48 states and Europe and cruising through the Panama Canal. In the winter, they enjoyed their condominium and their many friends in Pompano Beach, Florida.
Ronald is predeceased by his parents, Harold and Maude Ralph, his sister Helen Eugley, and by the love of his life, Claire Ralph. Ron’s brother Harold C. Ralph, Jr. passed away 3 days after Ron’s passing.
He is survived by his daughter, Rhonda Conway Collamore and his son, R. Stephen Ralph, four grandchildren and eight great grandchildren and sister Greta Crabtree.

A graveside service will be held at 1 p.m. on Thursday, December 3rd at the Orff’s Corner Cemetery, Route 32, in Waldoboro. Rev. Robert Dorr will officiate.

Contributions in Ron’s memory may be made to U.S. Trotter’s Association, Retirement Fund for Horses, 6130 So. Sunbury Road, Westerville, OH 43081.

Arrangements are entrusted to Hall Funeral and Cremation Services, 949 Main Street, Waldoboro. Condolences may be shared with the family at www.hallfuneralhomes.com
Read Less

We encourage you to share your most beloved memories of Ronald here, so that the family and other loved ones can always see it. You can upload cherished photographs, or share your favorite stories, and can even comment on those shared by others.

Posted Dec 09, 2020 at 07:17pm
The conversations I had with Ron and Claire on Rhonda's porch were always lively and entertaining. Ron was easy to talk to and humble regarding all his accomplishments. I feel fortunate to have met Ron and I am pleased that he lived past 90 because he enjoyed living so much.
Dewey Meteer
Comment Share
Share via:
RC

Thank you for the kind words Dewey. Rhonda
M

Posted Dec 03, 2020 at 11:11am
Ron was a great man always had a great smile .treated us drivers to a great lobster feed at the union fair for the whipless driving tournament. Ron rest in peace we love you
Comment Share
Share via:
RC

Thank you. I remember those lobster feeds. Rhonda
DD

Posted Dec 01, 2020 at 09:06pm
Steve, Rhonda and families,
Tom and I are so sorry to read of your father’s passing. We had so many fun times in Florida with him and your mother. At the racetrack, the barns, the casino, dinners and shopping. So many fun memories. Your mother and father are together again with your uncle right behind them. Hugs to all of you.
Tom and Dodie Dillon
Comment Share
Share via:

Thank you Dodie and Tom. I remember meeting you all in Mom and Dad's Pompano Beach condo. So many wonderful memories there. Rhonda
BO

Posted Dec 01, 2020 at 03:48am
Steve and family,
Gary and I are very sorry for the passing of your father. Keeping you in our thoughts and prayers.
Gary and Linda LAweryson
Comment Share
Share via: 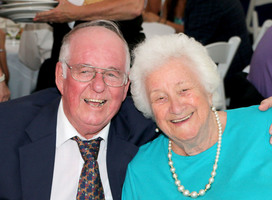 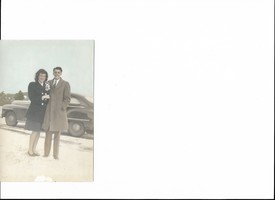