To share your memory on the wall of Katharine Cobey, sign in using one of the following options:

Born in Lee, Massachusetts to David Sedgewick Durant and Clare Raymond Durant, she spent her childhood travelling between New England and Florida with her family. She studied language and literature on a full scholarship at Bennington College in Vermont, and with her love of words, became a published poet.

After college, she married William Edgar. They raised their children in Africa, Belgium, England, Normandy and Washington, D.C., and she gifted her children with her love of the outdoors and adventure, her deep enjoyment of other cultures, and her dedication to friendship in every place they lived.

A significant injury in 1976 resulted in chronic pain that shadowed Katharine’s days. But with courage and determination, she turned her loss of physical health and strength to talent in knitting, spinning and sculpture and became a renowned fiber artist. With simple materials of yarn, metal and plastic she gave form to the power of her ideas about feminism, war, homelessness and Alzheimers. Her work has been widely exhibited in museums and galleries across the country. She was a juried artist with a demonstration studio at the Torpedo Factory in Old Town, Virginia from 1985 to 1992, winning an Artist of the year award in 1992. Her solo shows include Katharine Cobey: A Different Voice, Farnsworth Art Museum, Rockland Maine, 2019, Ritual Against Homelessness, Portland City Hall Rotunda, 1999, Dream Shelters, The Textile Museum, Washington, D.C., 1990, and Boat with Four Figures, Houston Center for Contemporary Crafts, 2002. She was a gifted teacher and speaker, conducting workshops throughout New England, constructively expanding the horizons of generations of other artists. She was the author of numerous publications, most notably her book, Diagonal Knitting: A Different Slant, Schoolhouse Press, 2010.

Katharine married David Boyce Cobey in 1977. Their passionate life together was filled with a shared love of art, ideas, nature, and poodles. Their beautiful home in Cushing, Maine was a testament to their relationship and a breathtaking gathering place with their treasured children, grandchildren and many friends. David’s unexpected death in 2013 was an unmeasurable loss that Katharine carried in her heart with cherished memories of their love to the very end.

A celebration of Katharine’s vibrant and remarkable life will be held when all of us who loved her can safely be together in person to remember our loving mother, grandmother and friend.

Arrangements are entrusted to Hall Funeral Homes and Cremation Services. You are invited to share your condolences with the family by visiting her Book of Memories at www.hallfuneralhomes.com.
Read Less

Print
A celebration of Katharine’s vibrant and remarkable life will be held when all of us who loved her can safely be together in person to remember our loving mother, grandmother and friend.

We encourage you to share your most beloved memories of Katharine here, so that the family and other loved ones can always see it. You can upload cherished photographs, or share your favorite stories, and can even comment on those shared by others.

Guaranteed hand delivery by a local florist
BE

Posted Dec 14, 2020 at 01:16pm
The family thanks everyone who has posted and will post here. We love the memories, and seeing the stories and input help us in these difficult times. Much love to you all. We will keep coming back here to see what people are saying.
Comment Share
Share via:
CS

Posted Dec 14, 2020 at 12:00am
Dear Clare and Tom, Bill and Eliot, Thomas and Clare and Michael and Christine, John, Alice and Chris, and Damian and Marylise,
It's hard to really understand that Katharine has died. It was my great good fortune to meet her early in 2015 when I joined the bereavement group to which she belonged. That group allowed Katharine to talk about her David, and me to talk about my Kenny, who died eight months after David did. We recognized each other as kindred spirits during that first meeting, and since that time I have always been honored and grateful that she and I are friends. In addition to being my dear friend, Katharine functioned as my big sister. She told me what I should&shouldn’t do, she wanted me to have a reason that passed her muster for any decision I made, and sometimes she was plain out bossy. I don’t like to be told what to do, but I knew that Katharine knew her stuff when she gave a command. So, most of the time, I did what she said. A few summers ago, my daughter Frith and I and my granddaughter Nora and grandson Hal spent an afternoon wi with Katharine at her wonderful house and land in Cushing. We started in her studio, where she showed the children how to spin yarn and allowed them to roam upstairs. Then the 5 of us took Katharine’s canoe for a ride. I don’t remember exactly what it was I was NOT to do, but Katharine told me, “Don’t do ———!”-and I didn’t. When we were back at the house, Frith told me, “You NEVER let anyone tell you what to do, but you did what Katharine said! I’m so impressed!”. Katharine spirit will remain with us. She will always be passionate and fearless in her beliefs and actions, vast in her intelligence and knowledge, and boundless in her love. I’m going to so much miss hanging out with her at her house, spending the night and then eating the eggs she cooked for the two of us and the dogs in the morning, walking with her and the dogs, feeling happy to help her with small chores or an occasional computer problem. I can only imagine the sorrow you all are feeling. I am holding all of you-and Katharine’s grandchildren, other relatives, and friends-in my heart.
Comment Share
Share via:
BE

Posted Dec 12, 2020 at 10:02am
Two summers ago on a rainy day in Maine, I walked into the Ogunquit Museum and came face to face with an extraordinary installation at the end of the entrance hall. “You know that’s knitted, right?” the docent said. I gasped. This was my introduction to “Boat with Four Figures." My heart still wells up when I think of it.

I don’t know how long I spent with this piece, so rich with story-telling, so profoundly expressive. I know I stood there in awe and wonder, deeply moved, unwilling to pry myself away, unable to really see or experience anything else after it.

I always said I was going to write a note to thank her. Even this morning, before I learned of her passing, as my eyes happened to land on the signed copy of her book that sits in my window seat, that thought surfaced again: “I really should sit down and finally send her a note to tell her how much her work meant to me.” I am deeply sorry that I no longer have that chance. Her work made such a profound impact on me and her loss moves me to tears.

Thank you Carol! I think perhaps as her children we didn’t always follow her commands quite as diligently. But we loved her, and she knew it.
BE

Thank you Carol! I think perhaps as her children we didn’t always follow her commands quite as diligently. But we loved her, and she knew it.
LW

Posted Dec 10, 2020 at 06:40pm
It is hard for me to put into words what Kady meant to me. When our families lived Brussels, Belgium for some years in the early 70's we got to know each other and I used to babysit for her children. Then one summer I was invited to their house in Normandy France to be their live-in Nanny - at the tender age of 14. Kady was larger than life to me and I idolized her as a mentor, teacher, artist and as an understanding, loving mother figure. She taught me so much about creativity, adventure, and love of life. She even taught me how to drive her Volkswagon bus (the kadybus) from the presbytere to the beach...although I rarely got out of 2nd gear and thank goodness it was a slow downhill slope. I adored her children and consider my two summers on the coast of N. France with them some of the best memories of my life. When Kady moved to Maine with David, I visited there once with my parents and again, it was so memorable and happy. She was like a big sister, second mother to me and I will always remember the love and generosity she gave to me and everyone around her. I am so sad that she is no longer walking the earth but I believe the earth will always remember her footprints. xoxo
Comment Share
Share via:
CM

Lovely to hear. I share your fondness for her.
BE

Thanks Lauren. Normandy was a special place and I am happy we shared it with you and her.
CA

Posted Dec 10, 2020 at 07:10am
I will always remember Katharine as a regal personage. She had a commanding voice and a dynamic presence. She also had a kind and generous heart. She enhanced my life through her teaching.
Comment Share
Share via:
BE 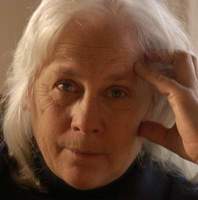 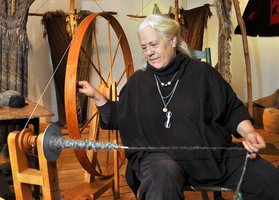 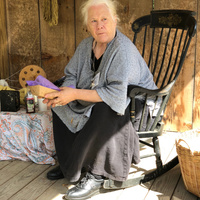 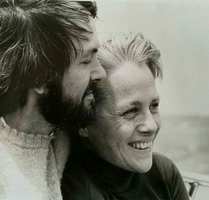