Obituary for Gerald A Barlow 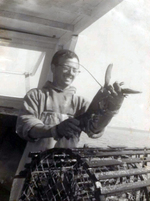 Gerald Ainsley Barlow, 81, passed away peacefully on Tuesday, December 8, 2020 at Midcoast Maine Hospital in Brunswick. He was born April 26, 1939 in Boothbay Harbor, the 9th and youngest child of Richard and Mildred Joyce Barlow.

Gerald, known to most as Jerry or JB, grew up in Boothbay Harbor and joined the Army with his lifelong friend Dennis Reed in 1958. Following his service with AFN in Korea, Jerry put his knowledge of radio and broadcast to use at Channel 8 TV in Poland Springs.


Jerry returned to the Harbor and the ocean that he loved in the 60's and began several decades of commercial fishing, building a family and a home with his wife Nancy and daughter Jana. Always versatile, he went on in later years to pursue other ventures, but at heart he was always a fisherman, and was always thought of as such by those that knew him best.

Jerry was quick with a joke and a laugh, and enjoyed the simple pleasures of a good cup of coffee and a visit with friends. Always on the go, his hobby of metal-detecting gave him an excuse to be out and about. His greatest joy was travel, and he loved nothing more than to drive and see new places. He made many trips south to the Carolinas and across the country to see Oregon, Montana, Alaska and more. He thought nothing of driving thousands of miles just for the scenery.

Jerry’s family would like to especially thank the staff at Midcoast Maine Hospital who treated him like family and made his final weeks more comfortable, full of extra care and special attention.

A memorial service will be held in Boothbay in the Spring of 2021, and will be announced in the Boothbay Register.