To share your memory on the wall of Virginia Morehouse, sign in using one of the following options:

Ginny is survived by her children: Robert (Katrina) Morehouse of
ME, Brenda (Steven Tanalski) Morehouse of TN, and grandson:
Joshua Morehouse of ME. In addition to her husband Donald, she
was preceded in death by her parents.

Ginny will be laid to rest next to Donald at St. Rose Cemetery in a
Committal Service, to be announced at a future date. In lieu of
flowers, the family requests that memorials take the form of
contributions to: St. Rose Catholic Church (Cemetery Fund) 215 E.
Front, Perrysburg, OH 43551.

We encourage you to share your most beloved memories of Virginia here, so that the family and other loved ones can always see it. You can upload cherished photographs, or share your favorite stories, and can even comment on those shared by others. 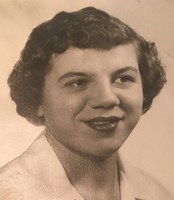