To share your memory on the wall of Henry Abbott, sign in using one of the following options:

Print
On Friday, January 8th, 2021, Henry E. Abbott of Boothbay Harbor died at an age of 83 following a
diagnosis of advanced cancer.

Henry was born on December 3rd, 1937, in Boothbay Harbor to Mary and Henry Abbott. The son of a
l... Read More
On Friday, January 8th, 2021, Henry E. Abbott of Boothbay Harbor died at an age of 83 following a
diagnosis of advanced cancer.

Henry was born on December 3rd, 1937, in Boothbay Harbor to Mary and Henry Abbott. The son of a
lobsterman, Henry was on the sea and introduced to the lobstering trade at an early age working with
his father. As a young man, Henry started a career as a stonemason and ran his own small masonry
business for over 30 years. His craftsmanship in stone and brick over the decades now graces many
homes and landmarks throughout the Boothbay Harbor region. Henry could never stray far from the
ocean, however, and worked at least part time as a lobsterman alongside his masonry jobs for most of
his life. In the mid-1990s, lobstering became his primary focus, and Henry continued to haul traps until
the end. He loved the waters of Linekin Bay and working upon its waves.

We will remember Henry for his soft-spoken, gentle gruffness. For his humor and the occasional tall tale
sprung on the suspecting and not. And for a special stubbornness only given to those he liked and loved.

He was never one to stay put for long unless he was sleeping. Henry applied that active energy as an
outdoorsman for most of this life and loved to hunt, fish, and trap game, or simply enjoy nature while
beachcombing or hiking. He exerted his vigor in the workshop as well, where he would happily putter,
plan, and build for days, applying Yankee ingenuity as an art form.

Henry was preceded in death by his eldest son, Michael E. Abbott, in 2007. His wife of 54 years, Carol P.
Abbott, passed away in 2012. In death he also joins his parents, Henry and Mary Abbott, his elder sister,
Gladis Ann Abbott, and his younger sister, Georgette Lewis.

He is survived by three children: His son, Jay H. Abbott, and daughter-in-law Lori of Boothbay Harbor.
His daughter Kelly Coffey, and Don Dixon of Lenoir, North Carolina, and his youngest son, Jason H.
Abbott, and daughter-in-law Kimberly Abbott of Springvale, Maine. He is further survived by his brother-in-law Bruce Lewis of Trevett, his niece Lori Mitchell, and nephew Brian Lewis. Many other loving relations and friends mourn his passing as well.

A memorial service and celebration of Henry’s life will occur at a future date. Instead of flowers, his family urges donations in Henry’s memory to the Iris Network — 189 Park Avenue, Portland, ME 04102.
Read Less

Posted Jan 18, 2021 at 10:54am
Sending my deepest sympathy to Sarron and family upon the sudden passing of Henry----He was a fine man and friend----He and Sharron have shared several years of happiness together------playing cribbage----socialising at the community center-----camping and being happy! RIP Cap -----WE all will miss your laugh and presence.
Comment Share
Share via: 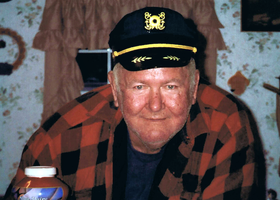