To share your memory on the wall of Laurence Peaslee, sign in using one of the following options:

Laurence was a Marine Worm Digger from young adulthood until he retired at the age of 77. He also drove the school bus for the town of Edgecomb for many years. When he wasn’t on the shore he grew Christmas trees and cut and sold firewood. As many will recall he provided locals with their yearly Christmas tree well into his 80’s. Laurence also planted and tended huge gardens every year to make sure his young family had plenty of fresh vegetables on their dinner plates. His kids all had to help weed and tend the garden. Fond memories of farm to table far more appreciated in adulthood than as children. Laurence was an avid deer hunter and took great pride in teaching his sons the sport. He loved bowling and participated in leagues for many years. Laurence also loved music and enjoyed playing tunes on his harmonica. He wasn’t much of a singer, but he could yodel with the best of them. He especially enjoyed this to communicate his location to his sons when working in the woods. The family remembers, it was music to their ears when he would play his harmonica and yodel while his mother played the piano.

Laurence celebrated 37 years of sobriety this year! To say he was an active member of AA would be an understatement. Lawrence worked his program, shared his story, sponsored and helped many people on their road to recovery through AA. He studied the Big Book and was a reflective and prolific writer, journaling daily.

He will be remembered as a strong, kind, and giving man. Laurence had a very giving heart. His helping hand was always open, often meeting the needs of others even before his own. Some may think of him as man of few words, but those who knew him best will tell you it was his actions that spoke for his beliefs and convictions. He conveyed many important life lessons through his day to day actions. Family is most important, hard work pays off, honesty is the best policy, be kind and be grateful. Those who knew him well hold him in high regard for showing gratitude, being humble and kind.
Forever our hero!

He is survived by his loving and devoted wife of 64 years, Eleanor F. Peaslee of Boothbay Harbor, who he met in Boothbay Harbor when he headed for the coast from his farming town of Somerville. They bought their first house in Boothbay and later moved to Edgecomb to a bigger home to accommodate their expanding family. He is also survived by his seven children, five grandchildren and one great grandson:

A graveside service will be held at the North Edgecomb Cemetery in the spring to be announced.
Read Less

We encourage you to share your most beloved memories of Laurence here, so that the family and other loved ones can always see it. You can upload cherished photographs, or share your favorite stories, and can even comment on those shared by others.

Much Love & Hugs to All, The Manks sent flowers to the family of Laurence E Peaslee Sr.
Show you care by sending flowers

Much Love & Hugs to All, The Manks

Much Love & Hugs to All, The Manks purchased flowers and planted a memorial tree for the family of Laurence Peaslee. Send Flowers

Posted Feb 03, 2021 at 07:33pm
Uncle Laurence was a man who worked hard and brought smiles to those who knew him.
You will be missed. May you Rest In Peace
Comment Share
Share via:
JC

Posted Feb 03, 2021 at 07:17pm
I have known Laurence since I was 15. He had to be one of the most gentle people I have ever met. Always a smile, a hug, a laugh. He was so quiet and laid back. You will be missed by so many people, Laurence. To his family, I have been blessed to be part of your lives all these years. Sending much love and prayers to you all.
Comment Share
Share via:
CP

Posted Feb 02, 2021 at 04:12pm
My heart breaks for you all - Please know that the entire Peaslee family are in my heart and prayers during this difficult time.
Comment Share
Share via:
KB

Posted Feb 02, 2021 at 11:39am
So sorry to hear this. Laurence was a staple in my sobriety for many years. He always met me with a smile and handshake. He was a very caring soul. God Bless you Laurence...
Comment Share
Share via: 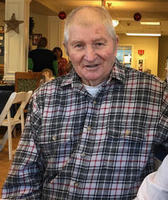