To share your memory on the wall of Edward Bean, sign in using one of the following options:

Print
Edward Leach Bean, 92, longtime Union resident passed away with his loving family by his side on Friday, April 2nd, 2021 in Rockport, Maine . Ed was born on March 10th, 1929 in Rockland, Maine to parents T. Lloyd Bean and Gladys Leach Bean.

Edward Leach Bean, 92, longtime Union resident passed away with his loving family by his side on Friday, April 2nd, 2021 in Rockport, Maine . Ed was born on March 10th, 1929 in Rockland, Maine to parents T. Lloyd Bean and Gladys Leach Bean.

Ed grew up in Appleton and attended school there. Never afraid of hard work, he started working at B. M. Clark’s in Union at night after school. He worked alongside his father cleaning the shop and learning the trades. Once Ed left school he went to work full time at B. M. Clarks and B.M. took him under his wing teaching him how to weld and to become a skilled metal fabricator. These skills became a sense of pride and served him well throughout his working career. B.M. knew that Ed was ready to strike out on his own and it was then that he bought a tractor and began earth work construction. Ed was self employed - he dug foundations, installed septic systems and earth work in the local area for many years. Ed was well known for his excellent work and because of that folks would wait up to a year just to have him do their work. Ed at one time bought a few tractors and leased them out to the State of Maine for mowing of the sides of roads and other projects that the state would ask him to do.

Ed met and married the love of his life Verna Wiley and they were married in Camden, Maine on July 8th, 1950. Their life was indeed a true love story, having been married for 71 wonderful years while raising two children. Their bond and devotion for each other was evident by anyone who shared their love.

Ed’s favorite past times were gardening at his home in Union alongside his wife. Their gardens were always well cared for. They were always willing to share with the neighbors as well as canning for their winter meals. Ed took part in preparation of last years garden and could still direct the family on the do’s and don’ts of a successful crop. Ed always enjoyed fishing with his best friend Neal Robbins and they would spend many Saturdays fishing the waters of Sennebec Pond and other favorite spots. Of course, a cold beer or two during those outings were always welcomed.

Family was most important to Dad, Grampa, Uncle Ed, and the bonds that were created by those he loved will never be forgotten. Ed so enjoyed working in his garage at home either fixing, fabricating, or designing something for a piece of equipment or helping a neighbor fix something they had brought down. He always said about his equipment- “If you can’t fix your own, you can’t afford to own them”. For anyone who had ever “borrowed” a tool from Ed’s garage, you were told to remember to bring it back and put it in the same spot that you found it and you only wanted to be reminded of this once!

Ed was predeceased by his parents along with all his siblings. Left to cherish his memories are his loving wife Verna of Union, his son Edward “Ted” Bean of Union, his daughter Jacqueline “Jackie” Gamage and her husband Ronald of Thomaston, his granddaughter Krystal Gamage of Rockport, his grandsons Steven Bean of Warren, Dylan Gamage and his fiance’ Sadie of Mesa, Arizona, He is also survived by brother in laws- Carleton Wiley ( Hope) of Warren, George Wiley of South Carolina & Arnold Wiley (Pearl) of North Carolina , his sister in laws- Agnes Crockett of Nobleboro, Celia Waltz of Warren, Donna Dow (Bill) of Waldoboro , Audrey Wiley of Appleton and Joyce Bean of Warren along with nieces, nephews and many friends.

The family wishes to thank Ed’s neighbors especially Joel and Sally Moore, Brud and Jan Wentworth for their many years of friendship along with a special thank-you to Audrey Wiley for her devotion and care for both Ed and Verna. Ed will be sorely missed by all who knew him.

A walk through visitation will take place on Tuesday, April 13th from 5:00 p.m. to 7:00 p.m. at Hall’s of Waldoboro, 949 Main Street, Waldoboro, ME. Social distancing and mask requirements will be observed.

Interment will be private . Ed will be laid to rest at the Pine Grove Cemetery, in Appleton, Maine.

The family has requested that if you would like to make a memorial donation in Ed’s name that they be made to Pope Memorial Animal Shelter, P.O. Box 1294, Rockland, Maine 04841.

Hall’s of Thomaston has care of the arrangements. To extend online condolences visit Ed’s book of memories at hallfuneralhomes.com
Read Less

We encourage you to share your most beloved memories of Edward here, so that the family and other loved ones can always see it. You can upload cherished photographs, or share your favorite stories, and can even comment on those shared by others.

Posted Apr 05, 2021 at 08:32pm
We loved Ed and Verna they were very kind hearted and gracious to us. We will keep Verna and the family in our thoughts and prayers.
Comment Share
Share via:

Aunt Verna and family, Rik and I were saddened to hear of Uncle Ed’s passing. It has been a long time since we visited but I remember Uncle Ed well with his quiet demeanor. He always greeted me with a shy smile. Aunt Verna if we were there we’d give you a big hug. We love you, Rik and Tammy Waltz 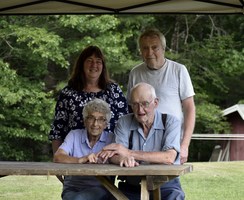 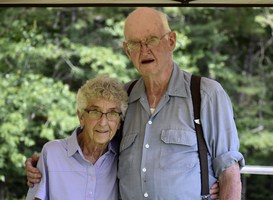