To share your memory on the wall of June Beane, sign in using one of the following options:

June was born November 29, 1937 to Earle (Junie) and Leona (Lee) Dunton in South Portland Maine. She moved to Boothbay and graduated from B... Read More
June-Lee Dunton Beane passed away peacefully on April 8, 2021 surrounded by her loving family.

June was born November 29, 1937 to Earle (Junie) and Leona (Lee) Dunton in South Portland Maine. She moved to Boothbay and graduated from Boothbay Region High School with the class of 1956. She considered herself a “harbor girl”. She loved knitting, sketching, and going for walks and lunch with sister-in-law Betsy Dunton.

June worked as a Cook in several restaurants in the area; Irene’s, Broken Anchor, Lobsterman’s Co-op and Jordan’s Restaurant. Her sassy personality and good sense of humor made her a joy to work with and be around.

She was predeceased by her parents, and brother Mike Dunton.

If you wish to donate in June’s memory, please send contributions to Midcoast Humane, 190 Pleasant Street, Brunswick, ME 04011

At her request there will be no service.
Read Less

Posted Apr 12, 2021 at 01:22am
Sarah & Mike, Deeply sorry to hear of your mothers passing and send our sincere condolences to you and your whole family. With love, Todd & Barbara

3 trees were planted in the memory of June Beane 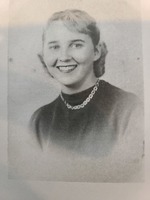