To share your memory on the wall of Mary Friant, sign in using one of the following options:

Print
Mary Evelyn Friant was reunited with her best friend and husband, Howard L. Friant, on May 23, 2021, one week shy of her 92nd birthday.

Mary Evelyn was born on May 29,1929 in Newark, New Jersey, to The Honorable George D. McLaughlin and ... Read More
Mary Evelyn Friant was reunited with her best friend and husband, Howard L. Friant, on May 23, 2021, one week shy of her 92nd birthday.

Mary Evelyn was born on May 29,1929 in Newark, New Jersey, to The Honorable George D. McLaughlin and Evelyn A. McLaughlin, née Amberg. The family moved to nearby South Orange where Mary Ev was a standout athlete at Columbia High School (Go Cougars!!) and where she met her future husband.

For many of her younger years Mary Ev attended camp, via train, to upstate New York where she spent entire summers making memories and friends for life.

Mary Ev received her BS in Economics from St. Elizabeth's College, Convent Station, NJ. At college she was a champion tennis player, remaining undefeated through her entire 4 years of collegiate competition, was goalkeeper on the NJ state field hockey team and followed in her mothers footsteps (St. E’s class of ‘22), competing in women’s basketball.

Mary Ev married Howard on Veterans Day, November 1951. During the Korean Conflict he was stationed in France with the US forces looking east as the Cold War heated up. Mary Ev travelled to France on a US troop ship across the Atlantic, landing in La Rochelle and joining her husband in the Bordeaux region. The devout young couple visited Our Lady of Lourdes Grotto, leaving with holy water, which Mary Ev will take with her to her final resting place.

In 1953, Mary Ev and Howard built a home in Sea Girt, NJ where they raised their growing family. Mary Ev and her sister Margaret were founding members of the Sea Girt Beach Club. She was an active member of St. Mark’s Catholic Church, where her nine children were baptised.

In 1967, the couple purchased a one-dollar raffle ticket from their church, winning a ’67 Cadillac. Not needing a Cadillac, they instead took the cash value and in 1968 bought a summer cottage on an island in Maine. In 1970 they relocated their family to Boothbay Harbor, buying the Seagate Motel, which they owned for 47 years. Much of Mary Ev’s heart stayed in NJ where her lifelong friends and all her family remained. In Boothbay Harbor she found an accepting community at her new church, Our Lady Queen of Peace, where she attended mass until she could no longer.

Mary Ev was a long standing board member of the non-profit Boothbay Region District Nurses Association which advocates for those with limited financial and family support.

For Mary Ev, sport was an essential part of life. With 9 children there was always an extra mit, skates, boards, bikes, a unicycle or a pogo stick and every form of a ball and always a hoop. Along with her friend, Al Sherman, she was instrumental in getting the Boothbay Harbor public tennis courts built, not private and accessible to anyone. Occasionally, when not working, she and Howard would fit in a set or two - she always won.

Out of necessity and industriousness, the mother of nine could repair just about anything: a bike that had been handed down 3 times, a fussy TV or a vacuum she knew had 10 more years of life. Mary Ev was an accomplished seamstress and knew her way around a sewing machine like very few do - she taught her daughters to sew, could patch her sons blue jeans for another year of wear and if the sewing machine acted up, no worries, she could fix it. Mary Ev could re-upholster a sofa, cane a chair, or hang wallpaper; she would take on any job herself before she would ask for help.

She found joy in music and could find a reason to sing about most things. Rarely did a day go by when she didn’t break into song, and at special times she’d play her old 33’s, singing to Glenn, Louis and always Frank.

Mary Ev lost the love of her life and best friend, Howard, in 2002. The loss of the man she’d known since 13 left a gaping hole in her life. Her family is grateful the Good Lord has taken her to be with Howard, where they can once again dance and sing.

A private burial will take place at the Maine State Veterans cemetery on June 7, 2021.
Due to Covid, a delayed Mass and celebration of Mary Evelyn’s long life will be announced at a later date.

In Mary Ev’s honor, the family kindly requests donations be made to The Boothbay Region District Nurse, P.O. Box 554 Boothbay, ME 04537.
Read Less

We encourage you to share your most beloved memories of Mary here, so that the family and other loved ones can always see it. You can upload cherished photographs, or share your favorite stories, and can even comment on those shared by others.

Posted Jun 17, 2021 at 12:20pm
Good Afternoon to the Friant Family… years ago our families crossed paths in Sea Girt,
NJ. My parents were Ltc Allison Clark and Joann Clark. We lived in a home on Allaire Rd and attended St Catherine’s school together. With our large family ( six kids) our families had much in common. I remember Angel coming to a birthday party in the summer and playing pin the tail on the donkey. Years later my Mother & Father would vacation in Maine and then after my Father died, just my Mom. She was thrilled to reconnect with Mary Ev, if only briefly. I’m sure they shared many happy memories. Your Mom certainly lived a beautiful, joy filled life. May she Rest In Peace and May God hold you in his arms until you are together again. Maureen ( Clark) Romanello
Comment Share
Share via:

Posted Jun 04, 2021 at 09:06am
Dear Friant Family, I was saddened to hear of the loss of your beautiful Mom. What a wonderful full life she led. She raised a beautiful family. I can see her now, corralling grandchildren while running Seagate! She certainly was a multi-tasker! My fondest love to all of you, you are all in my thoughts. Kim Mclellan
Comment Share
Share via:
EE

Thank you, Kimberly, what a lovely memory to share with us, it means so much to hear from you. She sure did have her hands full, no doubt about it! Kindest regards to you, The Friant family.
R

Posted Jun 01, 2021 at 10:20am
I am so very sorry to learn of your Mom's passing.
Both of your parents were such a positive influence in all of our lives as we grew up.
I truly admired her right to the point approach to things, as well as her honest yet caring manner.
She had a remarkable and giving life.
I hope the days to follow are filled with many happy memories.
With deepest sympathy,
Dick Perkins
Comment Share
Share via:
EE

Thank you for sharing your kind words, Richard. She and my father loved having a house full of kids, it was definitely when they were tat their happiest.
EE

Posted May 31, 2021 at 07:49pm
Mom, the long-distance between us all these years never diminished the love I have for you. I will miss you forever, but you are reunited with now dad, in peace, which makes my heart sing for the two of you. The kids miss their grandma who gave them blueberry muffins and coca-cola and hours of fun in the pool We will praying for you now and forever. Evie, Jed, Daisy and Augie
Comment Share
Share via: 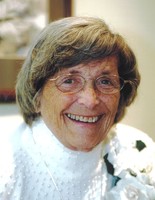