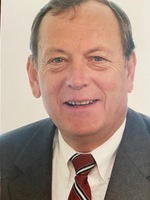 Perry Edward Bradley Jr., of Boothbay Harbor, Maine, died peacefully at home on May 3, 2022, of heart failure. He was 88.

Perry was born on February 11, 1934, in Memphis, Tennessee, to Perry Edward and Clara Belle Frank Bradley. He grew up in Germantown and enjoyed hunting and fly fishing with his father. An older sister, Betty, preceded him in death.

Perry earned his mechanical engineering degree from Cornell University. He met his wife of 64 years, Susan Fletcher Bradley, when she came to Cornell with her parents to visit her brother, Charlie Fletcher, Perry’s freshman-year roommate and lifelong best friend. Sue also graduated from Cornell, and she and Perry married on November 15, 1958.

Perry joined Procter & Gamble upon college graduation and worked for the company for his entire career. His work took the couple across the country and to Europe. They lived in Summit, N.J., Prairie Village, Kan., Cincinnati, Ohio; Modesto, Calif.; Cape Girardeau, Mo.; and Bonn, Germany, before returning to Cincinnati in 1978. Among the first recipients of P&G’s prestigious PRISM award for engineering excellence, Perry retired from the company in 1993.

Perry made sure the family took full advantage of each place they lived—skiing, camping, and exploring Europe in the family Peugeot wagon. He was a serial enthusiast, rebuilding Corvairs and Triumphs, riding motorcycles, backpacking, playing golf and tennis, running, flying gliders, and captaining boats.

Sue and Perry retired to Freeport, Maine. For more than 20 years, Perry volunteered as a tax preparer for AARP. He was a member of the Boothbay Harbor Yacht Club and served on the board of directors of St. Andrews Hospital. He also supported numerous nonprofits, including the Boothbay Region YMCA.

Perry is survived by Sue and their children: Ann Bradley of Bethesda, Md. (James Olson); Molly LaCroix of Bend, Ore. (Robert); Kate Geiselman of Dayton, Ohio (Eric); and Perry Bradley of Cincinnati, Ohio (Dana); as well as 12 grandchildren and three great-grandchildren. The family requests contributions to the Boothbay Region YMCA Parkinson’s Program in Perry’s memory. A private service will be held at Elmwood Cemetery in Memphis.