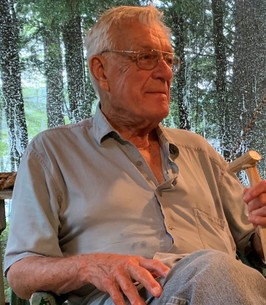 John N. ‘‘Jolly’’ Arsenault, a lifelong resident of Boothbay Harbor, died peacefully at home surrounded by his loving family May 27, 2022 after a long battle with lung cancer. He was 92 years old.

Jolly was born October 27, 1929 to Bertha Dunton Arsenault and John A. Arsenault, known as Johnny. Bertha died when Jolly was 18 years old. Johnny was a plumber who lived to teach his grandchildren how to play cribbage and shared with them many stories about Monhegan, where he lived for many years.

Jolly lived in Boothbay Harbor his whole life but he loved traveling to Prince Edward Island, where his father moved from at the age of 20.

Jolly graduated from Boothbay Region High School in the class of 1947. He could not get in the military as he had an irregular heartbeat.

On June 24, 1950, Jolly married the love of his life, Laura Mae McDougall. He died just a few weeks shy of their 72nd wedding anniversary, which they no doubt would have celebrated with a night out at one of their favorite Boothbay Harbor restaurants, The Tugboat Inn or Brown Brothers, where they loved to enjoy the comradery of their family, friends, and their countless acquaintances about town.

Jolly carried on his father’s plumbing tradition, beginning as a plumber at Fisherman’s Wharf Hardware afterhigh school. In the early ‘50s, Jolly went to work for Frank L. Sample Shipyard as head pipe-fitter working on mine sweepers being built for the US government. After that, he started his own plumbing and heating business, which he ran for many years until selling out to Walbridge Brothers Plumbing, Heating and Electrical. After filling his obligation to them, Jolly went to work for Redlons in Bath as a heating engineer and later went to Augusta Pipe & Supply, which has become F.W. Webb. He enjoyed a long retirement that began around 1995.

Jolly and Laura spent much of their summertime at their camp on Damariscotta Lake in Nobleboro. Jolly and his boys built a small three-season cabin in the early 1980s on his family property, where Jolly’s family and friends have shared many lobster bakes, cookouts, campfires and sing-alongs since the early 1960s.

Jolly built a Maine State Archery course in the mid-fifties at the Boothbay Fish & Game property with a couple of close friends. He excelled in archery, and enjoyed making his own bows and arrows.

Jolly was a Registered Maine Guide and always had a beagle for rabbit hunting with his closest friend John Tourtillotte and his son Jack. They would go rabbiting every Saturday they could all winter long when snow was on the ground. They loved taking their dogs into the woods to spend the day and roast hot dogs on a campfire while the dogs were driving rabbits. Jolly also loved small-game hunting for partridge and pheasants, when they were available. He also hunted deer and in 2008 shot a bull moose while on a family Maine Moose Hunt in Rockwood.

Jolly loved Boothbay Harbor and he found many ways to be of service to his community over the decades.

He was one of the founding fathers of the Boothbay Harbor Sewer District and he helped make the facility what it is today.

He was a member of the Boothbay Harbor Fire Department for many years. He ended his volunteer career in the fire service as a captain in the department and a well-respected pump operator.

He belonged to and supported the Boothbay Region Lions Club.

He belonged to the Masonic brotherhood and is a past master of Seaside Lodge #144, where he was a mentor to many Masons, young and old.

And he served on the Boothbay Region Cemetery Committee for many years.

Jolly and Laura have a long history of enjoying bluegrass and Canadian fiddle music with many friends around the globe. Jolly enjoyed playing his five-string banjo and being accompanied by his wife on the guitar. His sons Billy and Ronny would also join in with their instruments, along with many other friends. They traveled to Halifax, Nova Scotia several times to play with and listen to close family friend Jarvis Benoit and his family, well-known Canadian fiddle players. The Canadians would also come to Boothbay Harbor to play music.

One of Jolly’s proudest accomplishments was forming a close bond with his father’s lost family in Prince Edward Island. Jolly and Laura travelled many times to PEI and throughout northeastern Canada to get to know his father’s relatives, who are numerous given that his father had 11 siblings. One of Jolly’s favorite trips was to the 1995 Arsenault Family Reunion in Bloomfield where all of his sons and his grandchildren met their extended Canadian family for the first time. Jolly and his crew fit right in playing with their Canadian kin,entertainers and musicians who assembled together at the family church for a weekend of stories, food, and music. Jolly treasured time with his Canadian relatives, many of whom came to visit him and Laura at their Boothbay Harbor over the years.

Friends are welcome to join the family for a memorial visitation from 5 to 7 p.m. with Masonic Services at 6:30 p.m. by Seaside Lodge #144 on Thursday, June 9 at Hall Funeral Home, 975 Wiscasset Road, Boothbay. A service to celebrate Jolly's life will be held at 2 p.m. on Friday, June 10 at the Charles E. Sherman American Legion, 25 Industrial Park Road in Boothbay followed by a reception. Contributions in Jolly’s memory may be made to the Boothbay Region Cemetery District, P.O. Box 576,Boothbay, Me. 04537.