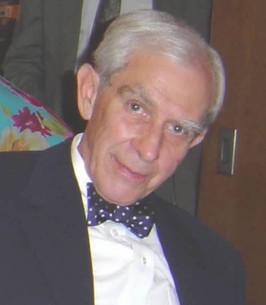 Calvin Carr of Boothbay, Maine successfully completed the earthly portion of his journey on June 5, 2022. He was born in Boston, MA on March 25, 1937 to F. Benjamin Carr, MD and Dorothea (Cashman) Carr of Worcester, MA.

He spent the World War II years in San Francisco, CA while his father, who was a Captain in the U.S. Naval Medical Corps, served as Chief of Medicine at Base Hospital 18 on Guam.

Following the war, the family returned to Worcester, MA. Calvin attended the Bancroft School, Worcester Academy, Cornell University, and received his Bachelor of Arts degree from Tufts University. He earned a Doctor of Jurisprudence, as well as a Master of Law in Taxation from Boston University School of Law. He worked for many years in the Law Department of John Hancock Mutual Life Insurance Company, retiring as Tax Counsel to the John Hancock and to its various subsidiaries in March of 1996.

On July 30, 1966, Calvin became, in his own words, “the luckiest person” when he married Mary Virginia “Ginger” Logie. Together, Calvin and Ginger had a very productive and enjoyable nearly 56 years of marriage. They had two daughters, Stephanie Carr Angelone (Ray Angelone) of Norfolk, MA and Kimberly Carr (Rob McCarley, MD) of Cape Elizabeth, ME. They lived for thirty years in Framingham, MA.

For years they summered at their cottage on Linekin Bay in Boothbay Harbor, ME. Calvin first visited the Boothbay region prior to World War II when he and his family were invited guests to the schooner Bowdoin as it left on its Arctic explorations, since Admiral Donald B. MacMillan and Calvin’s father were good friends. They would leave Boothbay Harbor and go around to East Boothbay where the invited guests disembarked, and the Bowdoin headed on.

After retirement, Calvin got what he described as the best job he ever had – becoming a grandfather to one grandson and six granddaughters.

In retirement, Calvin enjoyed volunteering at the Boothbay Region Land Trust where he served on the Board of Directors and as Secretary, Acting Treasurer, and Vice President. He served as Chair and Member of the Lands Committee for 25 Years. He and Ginger were charter members of the Coastal Maine Botanical Gardens, where he served as a volunteer for years. He was chair of the Nominating Committee during the formative years of the Gardens. Additionally, he was a member of the Downeast Yacht Club. Calvin most enjoyed family, sailing, cruising on their power boat “Salty”, and gardening.

He was pre-deceased by his parents and his brother, Dr. F. Benjamin Carr, Jr. He is survived by his wife Ginger, his two daughters, and seven grandchildren, Aeden and Lilia Angelone of Norfolk, MA and Emma, Madison, Amelia, Callie, and Harper McCarley of Cape Elizabeth, ME.

He was blessed with wonderful neighbors on Sawyers Island (who could forget Sally’s chocolate chip cookies!), countless friends throughout the peninsula, and all who touched his life along the way. He wanted to specifically remember his physician, Minda Gold, MD, whose guidance over the past 20 years never failed and whose sense of humor kept his self-esteem within sustainable levels.

His family is planning a celebration of Calvin’s life (time and location to be determined). In lieu of flowers, the family welcomes donations to the Boothbay Region Land Trust, the Coastal Maine Botanical Gardens, or a charity of one’s choice.

“Goodbye all – it has been a wonderful life.”