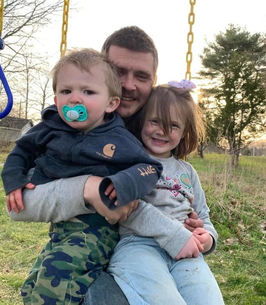 Caleb Gilmore Packard, great Father, Son, Brother, Uncle, Cousin and Friend, died peacefully on October 23, 2022. He was born on March 27, 1993 to Nathan and Valarie and he was an extra special identical twin brother to Cole.

Caleb attended Waldoboro Schools and graduated from Medomak Valley High School in the Class of 2011.

Caleb loved fishing, bird and deer hunting, especially with his brothers and his beloved dog Lucy; including his chosen brother, Justin Bickford. He was also known to have shot the biggest buck in the family. He enjoyed wood carving, hiking, family gatherings, and board games. But most of all he loved spending time with his children and family.

He was known for his hard work ethic, big hugs, his smile and dry sense of humor. He loved making people laugh and was always there to lend a helping hand.

Caleb was predeceased by his Nanny and Papa, Grandpa, and Aunt Kathy. He is survived by his daughter Elle and her mother Alex, his son Jackson and his mother and Caleb’s partner Amanda, his mother Valarie Hale (Kevin); his father Nathan Packard (Jan); sister Hannah (Pete), Ashley (Mark) and Alison; brothers Cole (Mariah), Eli (Anne), Tyler (Jolene), Andrew (Ashleigh), Robbie (Alyssa); grandmother Darlene Hale; as well as many Aunts, Uncles, cousins, nieces, and nephews and friends.

A celebration of Caleb’s life will be held at a later date to be announced.

Donations may be made in memory of Caleb Packard to the Sportsman’s Alliance of Maine, 205 Church Hill Road, Augusta, Maine 04330.