To share your memory on the wall of Walter Scott, sign in using one of the following options:

Scotty was born on March 31, 1923 in Hyde Park, Massachusetts and attended school and Christ Protestant Episcopal Church there. After graduating from Hyde Park High School, he joined the Naval Air Force V5 program where he became an instructor in Pensacola, Florida.

Scotty worked almost his entire career for Westpoint Pepperell in sales and management specifically representing the Martex Towel line. He raised his family in Needham, Massachusetts where he was a proud member and Past President of The Exchange Club and Chairman of the New England Region Red Cross. In 1950, he was introduced to the Boothbay Harbor region by his in-laws, Raymond and Eleanor Perry, who had a summer place on Sprucewold. In 1971 Scotty and Ginny built their own cabin and in 1983, they retired to Boothbay Harbor fulltime.

Ginny passed away in 1993, and daughter Ellen predeceased him in September 2018. In 1996, Scotty married Natalie Burditt Perry, who predeceased him in 2013. Scotty was a correspondent for the Boothbay Harbor Register for many years and a dedicated Boothbay Harbor Yacht Club member. After many years of attending St. Columba’s, Scotty and Natalie joined the Boothbay Harbor Congregational Church. An avid sailor, he sailed all over New England and the east coast as well as the Inter-coastal Waterway and the Mediterranean with his family and friends.

Besides his four children, Scotty also leaves his stepchildren, Andrew (and Barbara)Perry, Susan(and Paul) Hutcheon, Jane Perry, Richard and Eliza (and Alan) Merritt. He also leaves his beloved grandchildren, Sarah Ellen Morache and Andrew Walter Scott, of San Diego. Scotty was beloved by all for his positive outlook, genuine love of life, quick and easy humor, his kind and generous spirit and his loyal devotion to family and friends.

A memorial service will be announced at a later date.

We encourage you to share your most beloved memories of Walter here, so that the family and other loved ones can always see it. You can upload cherished photographs, or share your favorite stories, and can even comment on those shared by others.

Posted Apr 15, 2020 at 08:56am
On the first anniversary of Walter's passing, we want you to know that you are in our thoughts and prayers. We hope that the memories of the past give you encouragement for the future as you walk each day with your loved one in your heart. It is our privilege and honor to serve your family.

Posted Apr 29, 2019 at 02:35pm
My deepest sympathy to your family. May you find comfort in God’s promise to soon end all pain, sorrow and death. Revelation 21:3, 4
Comment Share
Share via: 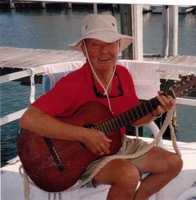