To share your memory on the wall of George Shultz, sign in using one of the following options:

Print
George B. Shultz, Jr., age 85, passed away peacefully in the arms of his loving daughter, Lori D. Hayes on Monday, January 7, 2020.

He was born on April 27, 1934 in Dallas, PA to George B. Shultz and Margaret Lancio Shultz and grew up in East Haven, CT. He attended local schools there, graduated from East Haven High School in 1952, and Milford CT Prep in 1953. In 1954, he married Carol Roberts and started a career as a draftsman at Pratt and Whitney Aircraft Corporation in North Haven, CT. In 1967, he founded East Shore Cleaning Service in Guilford, CT for many commercial and residential clients in the surrounding area. While on vacation in Maine, he fell in love with the state and moved to Waldoboro in 1985. He purchased a small farm and raised sheep. He took a job at Storer Lumber Company and worked there until retiring in 1999.

He loved to read, working on the farm, and boating and fishing. He was a long-standing member of the First Baptist Church of Waldoboro where he assisted in completing the main support building and planning the new building of the sanctuary.

George was a member of the Mobile, Alabama Baptist Builders Association and helped construct 5 churches in Oregon, Idaho, New York and Maine.

George is survived by his son William G. Shultz, and his wife Debbie Shultz of Mobile, AL.; his daughter Lori D. Hayes and her husband John M. Hayes of Howell, New Jersey; his sister Beth Ann Quick of Stockport, OH, his sister Ann Heffron of Grand Rapids, MI, his brother Dennis Shultz of University City, MO, his sister Carol Shultz of Austin, TX and his sister Helen Shultz of Lakewood, CO.; his grandchildren John L. Hayes, Emily A. Hayes, of NJ, and Maura Shultz and Meagan Fraser of MA.

A celebration service will be held at 2:00 p.m. on Saturday, January 11, 2020 at the First Baptist Church of Waldoboro, 71 Grace Avenue, in Waldoboro. Pastor Jon Vermilion will officiate. Burial will be held January 15, 2020 at Fern Knoll Burial Park in Dallas, PA.

Donations may be made to the Sussman House, c/o PenBay Waldo Healthcare Foundation, 22 White Street, Rockland, ME 04841.

Halls of Waldoboro has care of the arrangements. To extend online condolences visit www.hallfuneralhomes.com.
Read Less

We encourage you to share your most beloved memories of George here, so that the family and other loved ones can always see it. You can upload cherished photographs, or share your favorite stories, and can even comment on those shared by others.

Posted Apr 29, 2020 at 04:55am
As a child i spent summers wandering around his barns. Exploring... Finding all kinds of scary bugs and bones. He taught me how to mow the fields on turtle speed. I remember all the stray barn cats. He always had a toothpick in his mouth and Nan made the best pickled beets ever. He named a sheep after my sister and I . her name was M and M. When the sheep died, we got her sheep skin in the mail. It was a lot of happiness and sadness at the same time. He always ate some sort of bran cereal that I didn't much like. Yet when he had us pick fresh raspberries and blackberry from the side yard the cereal came alive. I hope you see this Bill. You are a hard person to contact. I am sorry for your loss. I will always treasure the amazing memories I had in Waldoboro... Probably spelled that wrong.... Oh and the stairs in that house! Jeepers. Im surprised I am alive. He was a true champ❤
Maura
Comment Share
Share via:
TR

Posted Jan 24, 2020 at 10:46am
We're so sorry for your loss. George was such a good man and neighbor. He was our next door neighbor bordering our property. We thought a lot of him. We pray God gives you comfort during your loss.

Posted Jan 17, 2020 at 01:43pm
So sorry to have missed his service. We heard he had passed but didn't know about his service. We loved George. He was such a kind-hearted servant. He hosted him at our home for lunch on a holiday one year. So sorry for your loss.
Comment Share
Share via:
MS

Posted Jan 15, 2020 at 02:09pm
When I think about George ... strength and resilience come to mind. It is comforting to know he’s in the arms of our dear Saviour! My sincere condolences to his family/relatives especially his dear daughter Lori.
Millie
Comment Share
Share via: 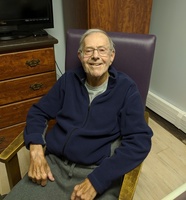